If you're like me, and I hope not because I wouldn't wish that mental health bill on anyone, you think end of the year lists are dumb. At least they are for the creator. These things have a sell-by date of the day they're posted and they look dumber and dumber every day after that. Trying to pin down the best album of 2014 in November of 2014 is some Sisyphean B.S., because you won't know the real answer until, like, 2018; well after the Haulix links expire and the innovative artists of today become the unimaginative hacks of tomorrow, and vice versa.

But that's my hang-up, not yours. As Steve Albini said, there has never been a better time to be a music fan. That's a bell worth ringing whenever a critic complains about the heavy yoke of consumerism while chasing a dollar on art's dime, because the keyword in that sentence isn't "industry worker" but "fan." Renewable truism: If you still like music, there's so much music out there to like.

However, the industry machinations behind the blog-o-whatever still dam the stream, which in turn damns bands who don't know how to play the game. And the Game of Clicks is some serious Calvinball crap. Lest you forget, bands get popular for mystifying reasons. Excelling at MailChimp shouldn't be one of them.

So, like last year, I offer this list as a nothing more than a list -- though the requisite narcissism behind casting WRITER in the role of MOSES still remains intact. Here are a bunch of under-appreciated releases collected in no particular order. But unlike last year, I won't be adhering to an elaborate exclusionary criteria. No Last.fm stats, no Facebook likes, no YouTube views, no awful videos. Nope, I'm just going to wing it, letting in-the-now enjoyment dictate the choices. And, while I'm stroking myself raw, I'm going to write it: Maybe that's the way it should be. Both you and these artists deserve the opportunity to make connections without the artificial inflation of brainless strawmen, magnanimous "worldliness," and sponsored-tour marketability. After all, you say you're a fan? Be a fan. And fuck the middleman.

Finally, if you don't like these picks, maybe you'll like something from here. Self plug! Look, the blog-o-whatever machine changed me. Don't weep for me.

Necessary disclaimer: Are these the best albums of the year? No. You can find those on other lists. Most likely, the most accurate list will be your own. Cool? Cool. 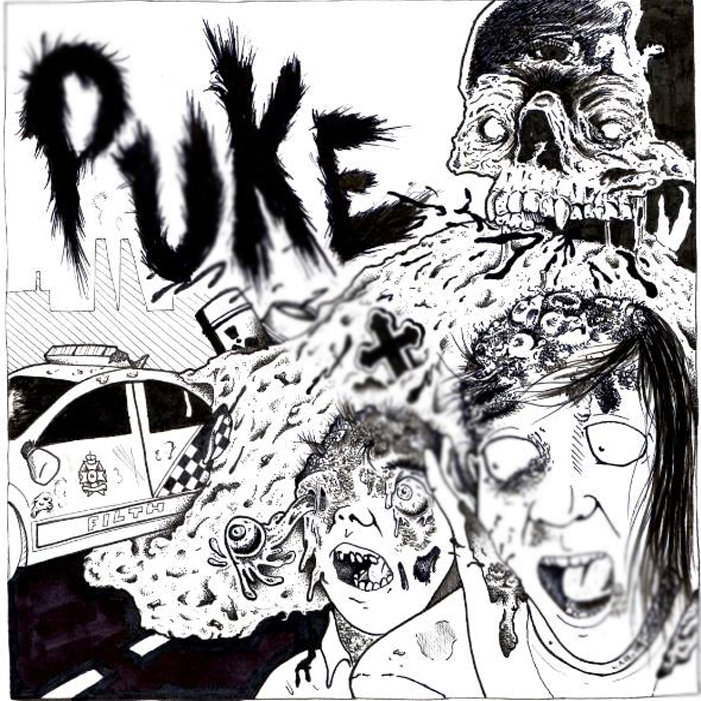 Brisbane's Puke are a strong reminder of a few things:

1. It's still possible to create ferocious grindy powerviolence without spitting out xeroxes of Infest, Spazz, and Crossed Out. If anything, Puke are Capsule on a bender enabled by No Faith. Short, choppy, and out of control.

2. Non-Brooklyn-based coverage of this stuff is still lacking, so I'd like to ask a punk. . . to start doing Upcoming Punk Releases. That's how that thing works, yeah?

3. It's worth searching Discogs before naming your band. Not tryin' to be a dick, just sayin'.

If not this one, how about: Greber - Kiln Hardened Psalms 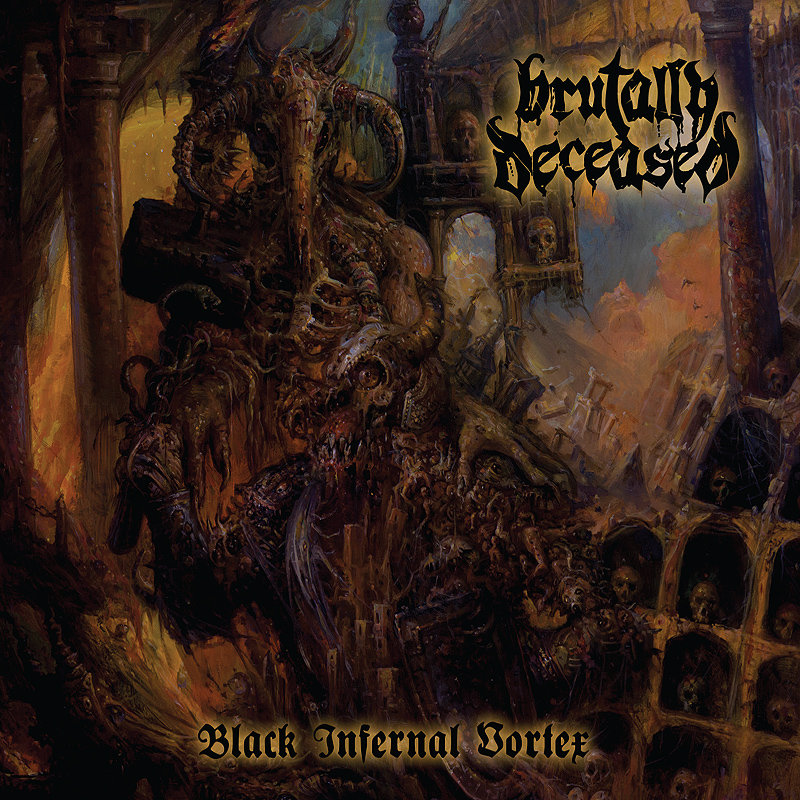 Doomentia Records spent the year racing with Avantgarde Music to see how many releases they could sneak under our radar. Brutally Deceased were one of Doomentia's better signings. Operated by Czech ex-grinders, this OSDM excavator was a reverent raiding of Grave's timbres. It's a total fanboy love letter to the Swedeath buzz, sounding like someone emptying a septic tank with a chainsaw. The tone is worth the price of admission -- provided you're into that sort of thing -- but Brutally Deceased also have a good handle on songcraft, meaning they don't forget that this style lives or dies by the catchiness.

There were tons of forward-thinking, inventive death metal released this year (Sup, Pyrrhon? Sup, Stargazer?). Black Infernal Vortex wasn't one of them, and that's its calling card, really.

If not this one, how about: Decomposed - Devouring

Frank Zappa often smudged his CD pressings with penalty tracks. I litter my lists with prog and power metal pain points. Apologies, but Anubis Gate is too addictive to pass up. Horizons engages your grey matter with Gordian Knot riffs -- like Fates Warning -- while sating your sugartooth with soaring choruses -- like, uh, Fates Warning. There were better displays of musicianship (Light Bringer), catchier prog of a power metal persuasion (Harmony), and truer disciples of metal's tenets (all of Stormspell Records) this year, but few others utilized all three tools like Anubis Gate.

If not this one, how about: Spires - The Whisperer 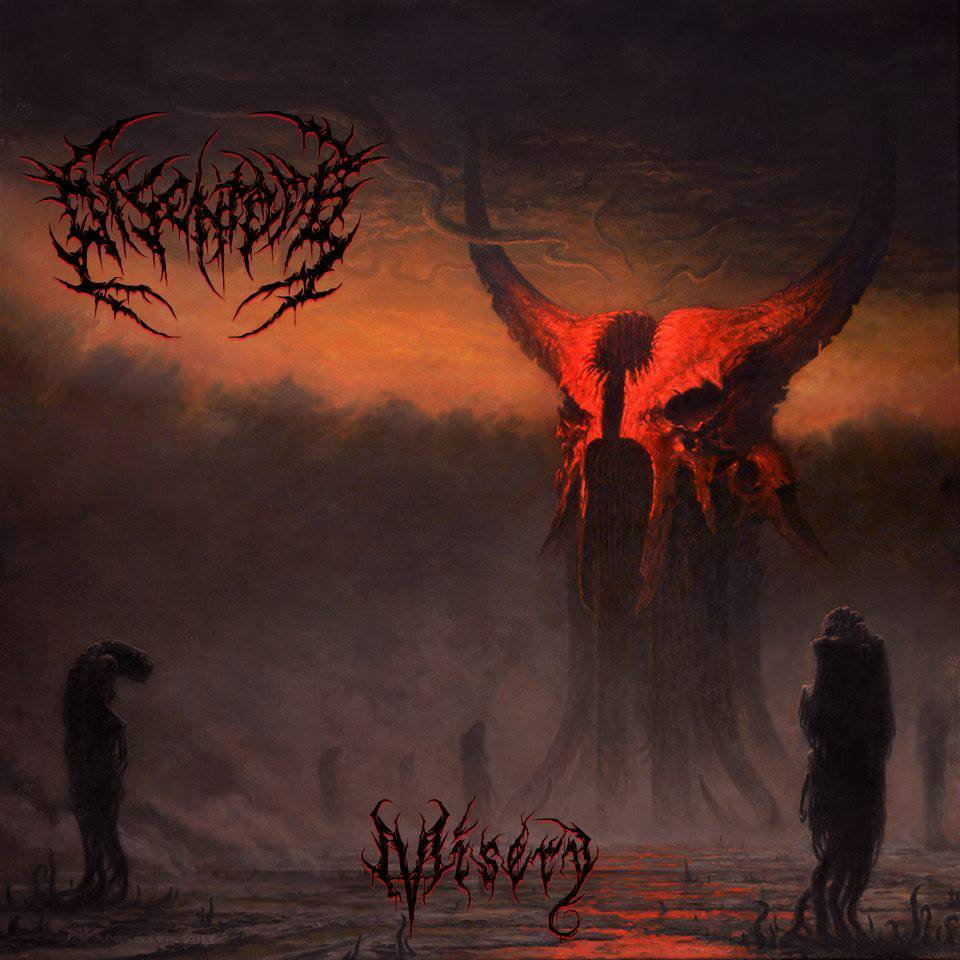 Like power/prog, few genres carve more cringes into kvlt faces than brutal death metal. I get it, slams are to metal what drops are to dubstep. Fine. But there are a couple practitioners every year that try to avoid jumping off the same bridge as everyone else. Disentomb were my guys this year, thankfully skipping the style's unfortunate obsession with misogyny and instead constructing something far darker and nastier. Sure, the blasts and borks were there, but Misery also had an ear for tougher stuff. Indeed, Disentomb have a keen knack for rich textures, nailing the filling-rattling divebomb dissonance about as well as Nile. That, along with the never-flagging tempo, made Misery an invigorating listen. Coprocephalic might've taken me to space, but Disentomb got me through the gym.

If not this one, how about: Blind Spite - Extinction Event 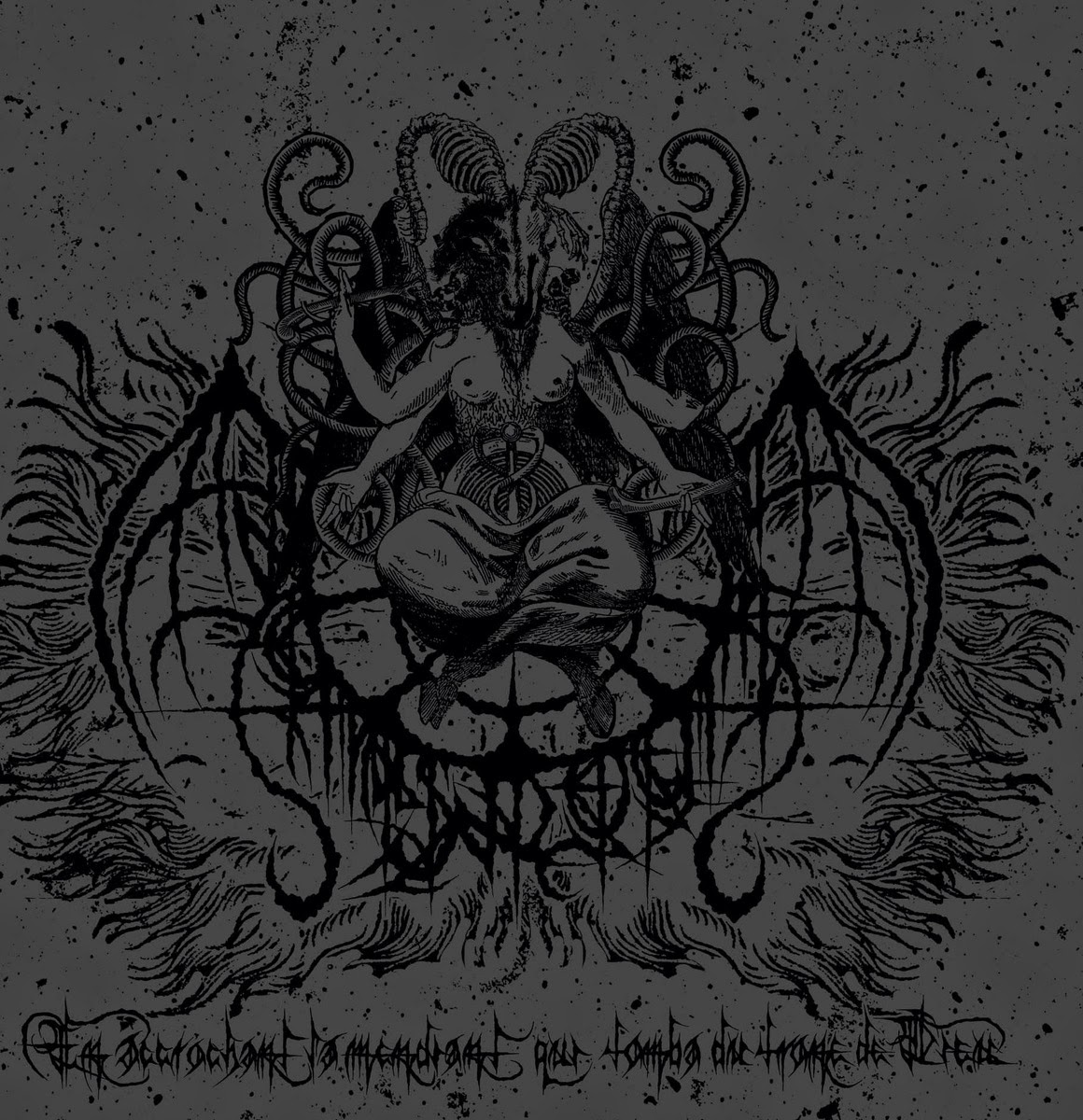 Black metal had another banner year. I mean, we're living in a golden age named "Blut Aus Nord." But there were standouts for everyone. Want riffs? Fides Inversa or Astrophobos. Thinky stuff? Foscor or Dornenreich. Evilness? Doombringer or Perdition Winds. Fog-thick atmosphere? Ordinance or Fluisteraars. And on and on. Plus, black metal continued to seep into all other styles as a favored modifier, proving that if there's a true sound for this decade, it has gotta be the bleak stuff.

That said, give me the weird. Arkha Sva are weird. Last I heard them, they were ultra kvlt; the kind of tinny warlocks requiring a sacrifice, one that was usually your speakers. Now, along with their strangled leads and Great Old Ones groans, they have unsettling singing like Urfaust. But what's really "off" about them is kinda indescribable. It's just that vibe. It's like when you meet a normal-looking person cloaked in an off-kilter aura. Then when they're hacking you to pieces in a dark alley, you're like, "Huh, I think I can put my finger on it now. . . "

If not this one, how about: Spectral Lore - III Feels like we went from not enough thrash to too much rethrash too quickly. But, backed by their blackened thrash brothers and fellow ragers like Nuclear Omnicide, Entrench are here to tell pizza-scarfin' bros that the party over. And what's quashing the kegger? The return of the real riff. Entrench quickly audition hundreds of headbangable death/thrash riffs in 50 minutes, as if they were getting paid per exterminated braincell. It's a cyclone-paced revolving door of Slayerisms and Dark Angel dives. And it just sounds legit; no puffy hitops were bought on eBay to lend Violent Procreation cred. If you did a blind listening test with this and the Numskull reissue, the most common response would be, "It's so cool that both of these are back in print."

If not this one, how about: Ripper - Raising the Corpse

Recorded in 2010 and with a b-side filled out with demo material, Wizard's Spell's history hints at a tossed-off mess. Add in they're "trad" in a time when "trad" means "I bought a Venom album after my college punk band graduated" and you're just asking for trouble by jamming this one, right? But what if I told you half of this duo had roots in Deathhammer, the canny creators of timeless throwbacks earning nods of approval from Fenriz? And that Black Magic mirror the shambling evilness of early Mercyful Fate? Maybe you'd quiet the qualms? Either way, fear not: Wizard's Spell can fittingly be inducted into the old guard of speed metal. It's the kind of heavy that uses its bridges like a instrumental storyboard for horror and adventure, winding through the long halls of Necropolis. Different sides of the same coin, but this pairs pretty well with New Light Choir. Go have an old school Sunday.

If not this one, how about: Chainbreaker - Constant Graving 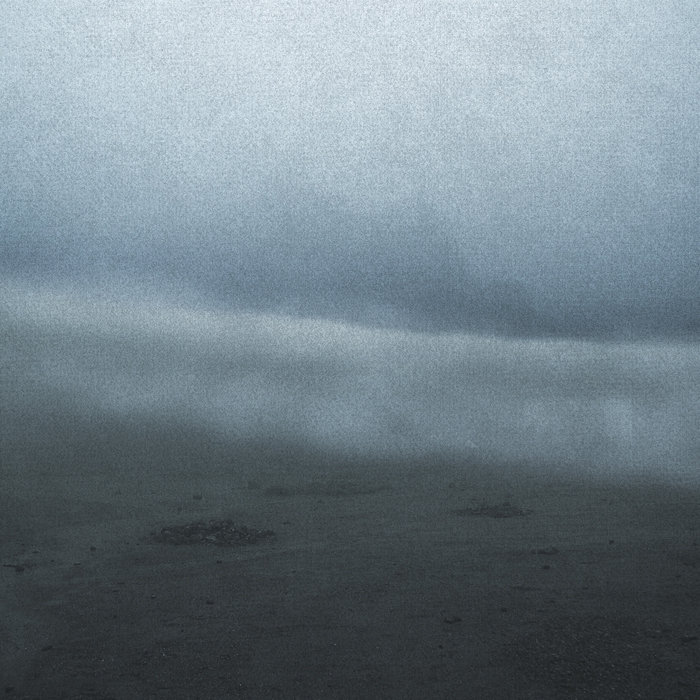 I can't have enough Corrupted, which means I need more Corrupted while I wait for more Corrupted. Funeral Moth do the quiet/loud, slow-motion trudge pretty well, switching the sludge out for funeral doom. Songs brood for long stretches before unleashing the subwoofer-wrecking thrum of all-downtuned-everything. While Dense Fog redlines often, it's the moments of silence that penetrate the deepest. The loudest bands always seem to have the best handle on negative space, you know? And a ghostly guitar wrapping itself around a mournful guttural death rattle is still one of metal's finest wonders.

If not this one, how about: Ocean Chief - Universums hard 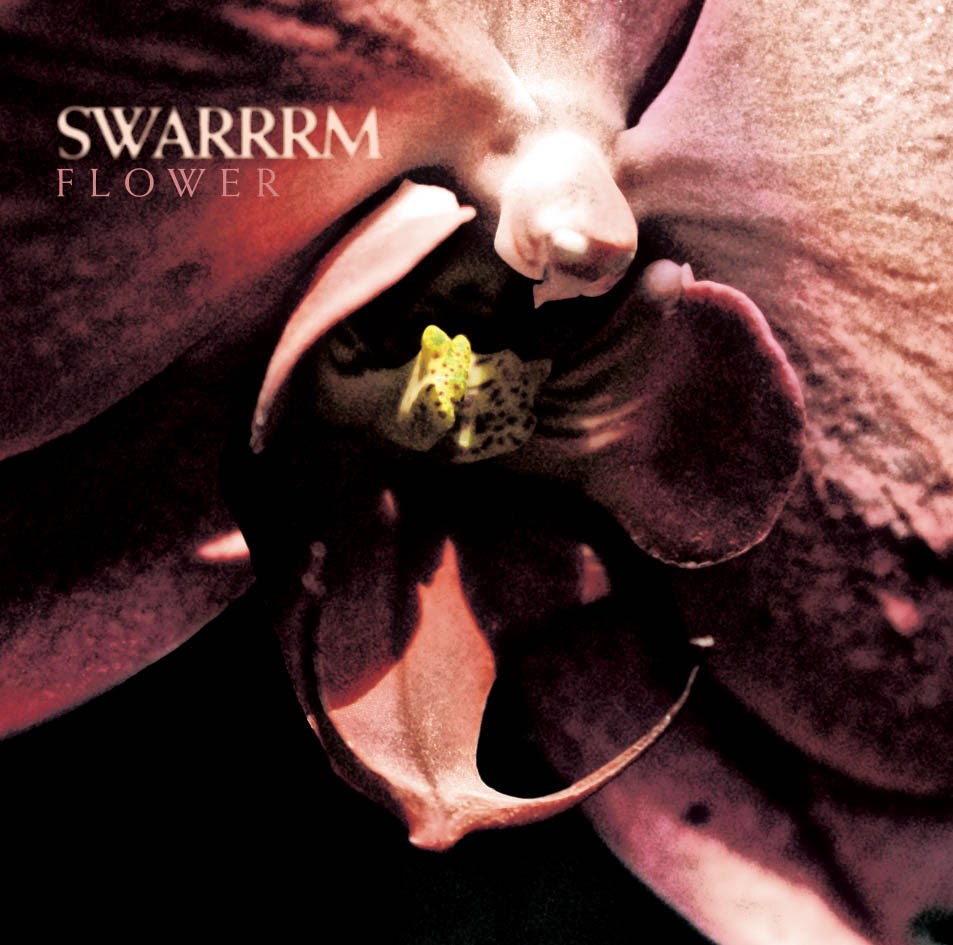 How do you feel about melody swimming around your death/grind? Whatever you're thinking isn't anywhere close to Swarrrm, whose blasts breathe fresh air. Sometimes Swarrrm slip change into the jukebox and ride atop anthemic rock. Other times, they employ nervy post-hardcore. Whatever the method, they're often bucked off that groove by utter chaos. The lone constant is singer Tukasa (Force, Hellchild) who must have vocal chords that look like an oft-tapped trunk of a maple tree. Rarely have I heard a more harrowing howl or a singer who has such disregard for his own health. Swarrm aren't for everyone, but they'll light up the ears of those who want a new flavor. For every other grinder, ignore my hyperbole and grab that PLF album. (Or Dead Instrument. You've got choices, is what I'm saying.) Now there's a crowdpleaser.

If not this one, how about: Tools of the Trade - Proclamation

Like Slugdge, Ethereal Riffian aren't doing themselves any favors with the name. If you recommended this to me as ambient reggae, I wouldn't bat an eye. . . before terminating our friendship. But, like Slugdge, Ethereal Riffian shatter expectations. Surprise: This is some thick stoner doom, finding the same universal wavelength as Al Cisneros. Enormous riffs revolve around deep drones that give way to spacey reveries. Think "From Beyond" jump-cutting to "Planet Caravan" covered by monks, or something. I guess you could just say they lull you to Sleep. Get it? Because Sleep. Sighhhhhh. And that's why I fired myself.

If not this one, how about: Zaum - Oracles

If you've got more that's out-there and obscure, please post them below. Thanks for sticking around this year and, as always, happy digging in 2015.

Filed Under: best of 2014, features, ichainey
Categories: Features
Comments
Leave A Comment
Mental Illness is not The New Black: The Myth of Devin Townsend
Nine Essential Second-Tier Melodeath Albums
Top 7 Most Metal Fantasy Premises
On Being a Musician in Oslo vs. Paris
17 Bands You Need to Know from Asheville, North Carolina
A Playlist of Disease