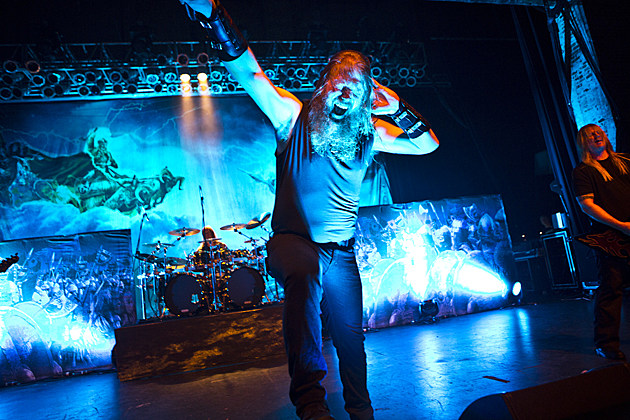 You hear people say this about metal bands a lot. It's always struck me as a weirdly back-handed compliment. "They're better live" is a shortened version of "They're better live than on record," which is the same thing as saying "They're worse on record than live." The first formulation is a badge of honor — proof that you're not 'faking it' with studio magic. But how many bands would willingly accept the second?

It's not a big deal to be worse on record if you've reached the stage in your career where you only release new albums to justify your next tour. A lot of professional metal acts arguably fall into this camp: Amon Amarth, Overkill, Kreator, Dying Fetus. Motörhead may be the best example amongst canonic metal acts. That's not intended as a criticism. These bands know that they have little incentive to change their approach, and so they openly cater to their fans' expectations. Many metalheads — myself included — happily trot out to our local House of Blues-style venue and shell out between $25 and $50 to enjoy such acts. They do their thing, and we have a great time. Then we go home and listen to their first few albums instead of the new ones. It's a livelihood if you're a member of such a band, but it isn't always very lively.

Other bands are worse on record by design. They craft their sound explicitly for live performance. Their albums are just sickly impersonations of the 'real' thing. The obvious non-metal example is Phish; the obvious metal examples are 95% of doom and sludge bands. Many of metal's core components — crushing guitar tones, epic dynamics, driving or crawling rhythms, etc. — translate best when they're insanely loud. Unless you own a ridiculous sound system and live in the middle of nowhere, such volumes exist only at gigs. When massive speakers are blasting riffs into your head at a zillion decibels and you aren't surrounded by the quotidian distractions of modern life, even so-so songs can elevate your consciousness.

If you're the kind of fan who views albums as a way to learn where to gesture, headbang, or mouth the words, then you probably live for such bands. I enjoy seeing this type of band live too. But afterwards, I usually forget about them. I'll think: "Man! That was great! I should give their album another shot!" And then I do, and it's not as good, so I move on. If you need four full stacks cranked to the max to make your songs sound cool, they're probably missing something.

Still others are worse on record by accident — they just never get a proper studio treatment for one reason or another. A lot of late-'80s and early-'90s extreme metal bands suffered in this way, as blastbeat-friendly recording techniques weren't common knowledge at the time. I feel more sympathy for bands who get shafted by poor production, but it still registers as a shortcoming to me.

There's a reason that the entire rock-band lifecycle is based on releasing albums of original music. Albums are less transient than live shows. Indeed, albums routinely outlive the bands that created them. They're a way of crystallizing and then transmitting ideas that feel fresh, or should. By contrast, a pitch-perfect live metal set can provide a huge thrill. But when it's over, all you're left with is a happy memory and whatever cuts, bruises, and merch you accrued. (There's good reason to suspect that such positive memories fade more quickly than negative ones.)

Albums, on the other hand, can be revisited over and over. The magic of the live show fades when the band breaks up (and sometimes before then), but as long as the technological means to play them exists, recorded work is basically immortal.

Personally, I'd take a band with a great discography and an awful live show over the converse in a heartbeat.

In a perfect world, all bands would be equally good live and on record. Live and recorded music can highlight different components of the same band. Performances typically emphasize a group's forceful, spontaneous side, while studio material conveys the scope and detail of their compositions more clearly. Truly great metal acts — Iron Maiden, Slayer, Neurosis — take advantage of this fact. The recollection of a great live show can also improve a great record. You could make an argument that you haven't really heard Reign In Blood until you've seen "Raining Blood."

But most metal bands are not truly great. Most bands are kinda great, or really good, or "decent." (Describing metal bands as "decent" bugs me in the same way that the word "nice" bugs Kate Winslet's character in Eternal Sunshine of the Spotless Mind.) When these mere mortals choose their artistic paths, most of them decide whether to focus on the studio or on the stage. The world has a sizable place for bands who choose the latter, but my heart and wallet reserve their affection primarily for the former.

This all may be a commentary on me as much as on this issue more broadly. Since I didn't know anyone who was really into metal while I was growing up, I got into the music alone. I spun the classics over and over on headphones; I'd hear the riffs in my head for weeks after. It's a solitary way to experience the genre, as opposed to the communitarian version offered by friends + scene + live jams. But though I typically attend multiple shows per week these days, solo listening remains my most cherished way to experience music: faraway musicians and me, joined at the brain by a static artifact.

All of this is an extremely roundabout way to pose a question: where do you guys fall on this issue? Does a band's recorded work or live show matter more to you?

Filed Under: dmoore, features
Categories: Features
Comments
Leave A Comment
Mental Illness is not The New Black: The Myth of Devin Townsend
Nine Essential Second-Tier Melodeath Albums
Top 7 Most Metal Fantasy Premises
On Being a Musician in Oslo vs. Paris
17 Bands You Need to Know from Asheville, North Carolina
A Playlist of Disease