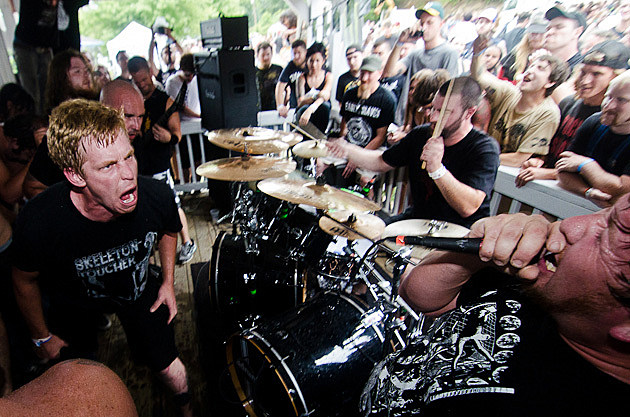 Since noise/electronics maven Blake Harrison joined the Pig Destroyer fold in 2007, it's been a common (and somewhat legitimate) criticism that he hasn't added too much to the band's recorded sound. Onstage, he's a de facto second frontman, supplementing J.R. Hayes' depraved howls with his own bug-eyed insanity and, erm, throbbing, gristly soundscapes. But on record? He triggers samples, pops up on intros and outros, and mostly keeps to the back of the mix.

Not the case on "The Octagonal Stairway," the new PxDx single out via Adult Swim. Harrison hangs with Scott Hull's riffs and Adam Jarvis' drums the whole way, whether it's with a pulsing backbeat or a show-stopping drop that carries the track to its static-laden conclusion. Hayes co-conspires admirably with an Escherian lyric and a rejuvenated vocal that comes across stronger than many of his Book Burner performances. The only bad thing about "The Octagonal Stairway," in fact, is that it probably doesn't mean we're getting another new Pig Destroyer LP any sooner.