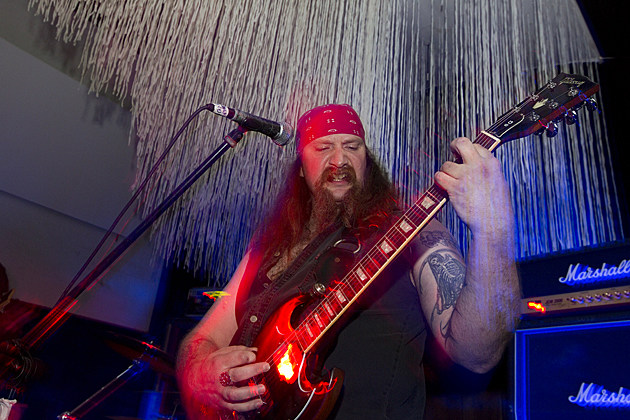 During the four years I spent living an hour south of Indianapolis in idyllic Bloomington, worthwhile local metal shows were few and far between. There were great bands in the region, to be sure — Black Goat of the Woods, Deschain, Charnel House, Thorr-Axe, Apostle of Solitude and others. The trouble was gathering enough of these far-flung acts at the same place and time, and putting them on a bill with a headliner who could draw a crowd.

I only ever saw two headliners who managed to do this consistently: the brilliant blackened sludge crew Coffinworm, and The Gates of Slumber, a stuck-out-of-time doom trio who have, alas, called it quits. Lead vocalist and guitarist Karl Simon confirmed the news late last night on Hellride Music Forums:

"Some of you may have noticed that [guitarist] Jason [McCash] quit The Gates of Slumber this past week.

So, yeah. it's done. I always said I'd never go on doing TGoS without Jason, I don't think anyone ever really believed it, but yeah, it's done. I did start the band, but McCash has been my best friend for the last 20 years, the last 10 in this damn band. He wrote amazing music and was a killer person to be around on the road.

Somewhere about 3 years back shit started to change, and it's ended with him quitting. I'm sure he needs the break, probably from me... I'm starting to *kind of* get the hint. :D

When the post hit, there was plenty of speculation that this was just an unusually public way for Simon to air out some of the internal struggles the band has gone through over the past few years. McCash has since confirmed the split in a morose Facebook post, though, and Simon's estimable standing in the Hellride community certainly makes it appear that this is truly the end for The Gates of Slumber.

The band's legacy will be impressive: five full-lengths, including 2008's landmark Conqueror and its ripping follow-up, 2009's Hymns of Blood and Thunder. (Asked about the white-whale-holy-grail of an album title, Simon awesomely told Decibel he didn't know about the hit song: "I guess I should be listening to Mastodon, but I'm too busy listening to Thin Lizzy.")

The Gates of Slumber never tried to reinvent the wheel; in truth, their cavernous doom recalled an era before that particular technology existed. In nearly every song the band ever recorded, Simon's vocal would waver between yelp and roar over a lumbering riff from his vintage SG, while McCash and drummer Bob Fouts would make it groove with the same conviction as Paranoid-era Geezer and Ward. The magic the band could cull from this basic framework — with unusual structures, flamboyant guitar solos, and multi-part epics informed by Lovecraft, Howard and Frazetta — was what made them special.

The dissolution of The Gates of Slumber leaves a void in the Indiana metal scene that I'm afraid no one will step in to fill. It isn't that there aren't any quality bands who could conceivably start playing more shows, or that Fouts won't continue to bring great bands to town in his still-active role as a booking agent. (His Exhumed show in March remains one of the best I've seen all year.) It's that there's likely no one left who can unite metal fans of all stripes and get them to come out early and see what else is going on in Indy. Simon, McCash and Fouts had a way of making their small scene feel much larger. With their departure from the stage, it may take a while before it seems big again.