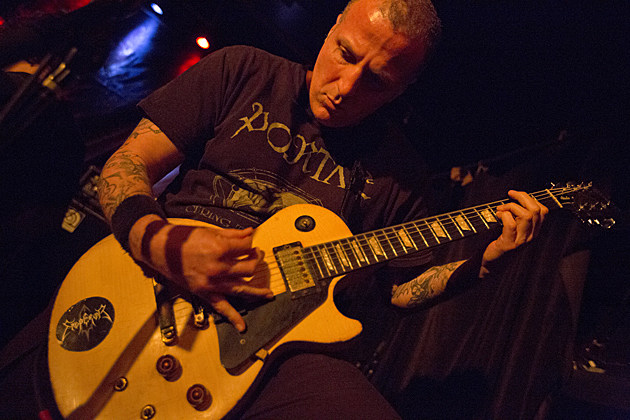 Martial arts, and combat sports more broadly, are the subject of growing interest among the metal community. It makes sense: both are violent, forceful pursuits that provide counterintuitive benefits to those with the discipline and drive to pursue them. Martial arts thus struck me as the perfect subject for a Pure Testosterone column.

Since I know very little about the subject, I asked Tombs/Anodyne frontman, Everything Went Black podcast operator, and past Pure Testosterone contributor Mike Hill to write about his longtime experience as a competitive martial artist. —DM

When most people think of martial arts, they think about flying kicks and five-finger death punches; the ego-driven benefits like being able to defend yourself or break boards with round kicks. Training will for sure give you the ability to defend yourself; you’ll get in great physical condition and you will gain more self-confidence, but other, less obvious benefits that reside in more esoteric realms are equally interesting to me.

I’ve had a life-long fascination with fighting and martial arts, first getting involved with wrestling when I was a kid, then training Tae Kwon Do when I was a little older. For the past few years, I’ve been obsessed with Brazilian Jiu Jitsu and Muay Thai.

I’ll be honest: I love learning how to choke people, break arms and deliver head kicks. But as I mentioned before, there is a deeper element to all of this that has helped me grow as a person and has given me a perspective on my life that I’ve never been able to gain anywhere else, including in the years spent making music. The life of a musician is filled with factors that are completely out of your hands, such as whether or not people will like your band, or if you have the right kind of “look,” or if the style of music that you’re playing is popular at the moment. In martial arts, you are in complete control over whether you fail or succeed; if you show up, train hard, and pay attention to learning, you will improve and overcome your limitations. You can’t fool yourself into thinking that you are better than you actually are; fighting and martial arts have a finality, an absolute value that is undeniable.

The essence of martial arts is truth. The guys that don’t show up won’t make it. You will also get intimately familiar with your fragile ego, especially if you plan on training Brazilian Jiu Jitsu. On the first day of training, you are a formless lump of clay with no skills and no endurance. Most people are not able to see themselves through this lens; their egos create a protective image that will quickly be shattered the first time a guy half their size ties them up and puts them in a submission. Yes, the term “submission” is another concept that doesn’t sit right with most people.

A lot of people will never come back after an experience like that. They would prefer to stay within the safety of their ego rather than push their physical and emotional boundaries. In the beginning, you spend a lot of time in these positions, tapping out, “getting your guard passed,” and getting dominated. There’s a line in Fight Club where Tyler Durdin says, “It's only after we’ve lost everything that we’re free to do anything.” That line comes to mind. Only after your ego is completely broken will you realize that regardless of your station in life, in this realm you are a novice. When I reached that point, it was like a portal opened to another dimension and I saw the path to improvement.

The basic weekly schedule I keep is illustrated below. In addition to martial arts training, I also add a day of weight training.

Every five days, I do a strength training session which consists of deadlifts, squats and overhead presses. High volume with moderate weight.

How many of you guys train in a martial art? What about watching them? Why do you think so many metal folks are into this stuff?