Morbosidad and the pig's head 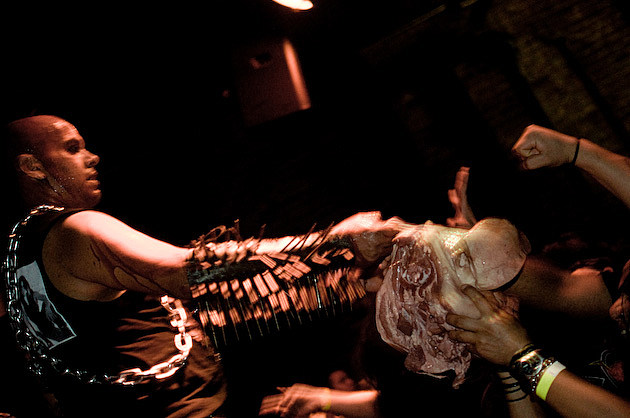 Signature Riff’s Martyrdoom was back for its second annual installment this past weekend, bringing 20 some-odd metal bands of the underground variety with it. This year the fest moved further into Brooklyn, forsaking Public Assembly in the heart of Williamsburg for The Paper Box, a venue out near The Acheron in East Williamsburg that I had never been to before. It’s a cool space. There’s a big outdoor area and two indoor rooms, one large, one small. Bands had been scheduled to play outside, but the weather forecast nixed that. The rain never showed, though. The forecast here in NYC for the past week was nothing but thunderclouds and lightning bolts, and I think it only rained, lightly, once. Weathermen—how nice is it to be able to screw up your job everyday and not get fired? 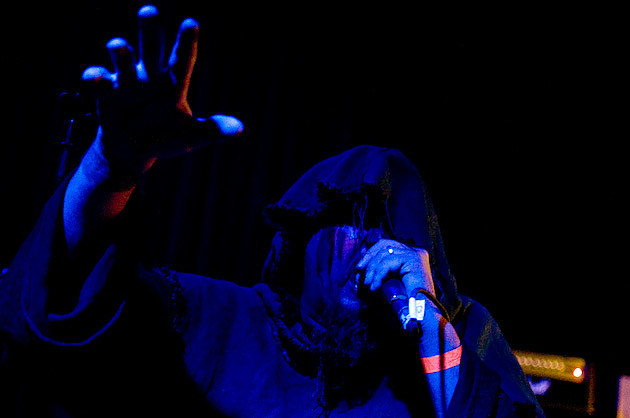 I showed up and wandered to the smaller space to find a band with a cloaked singer, guitar players in a sort of tribal war paint, and a pretty clean-cut drummer. The band was playing a blend of black and doom metal, and they were great. I found out later that the band is called Stoic Dissention (listen). A five piece, they’re from Colorado. I was most excited to see another band from Colorado, The Flight of Sleipnir. Colorado, keep up the good work. I soon found out, though, that they had already played, which was a bummer.

The Paper Box was good for wandering, and there were a number of merch stands set up both in and outside. A few stands brought distros, too, loaded with obscurities and good finds. I thought it was cool to find a tape label, Contaminated Tones Productions, set up outside. Outside was a good area for congregating, and it seemed that there was a lot of catching up and Revenge shirting going on. 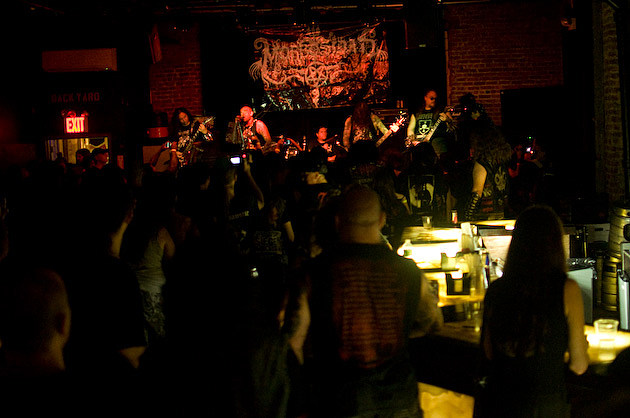 Atrium Inritus, Decrepitaph, Kommandant, Ptahil, and Set played, and I missed a few of these when I grabbed a burger over at The Anchored Inn, which was stupid delicious. I headed back over to walk in on Morbosidad. Shit got real, real fast. The singer was covered in blood, etc., and they had three pig heads and two goat heads. (I’m told—I only saw pig heads, can’t tell how many, they sort of looked the same.) The pig heads were being tossed around like festival beachballs, liable to land wherever. Like an asshole, I had brought my girlfriend with me, and my buddy later told me that I now have to go to any concert she wants, whether it be Shania Twain or Alicia Keys or whatever, in perpetuity. Great night all around.

I learned something at the second day of Martyrdoom: metalheads are immune to heat stroke.

I once attended a matinee death metal show show that semi-sarcastically billed itself as “Camo Shorts Fest.” (It was as bad as it sounds.) The analogous name for Martyrdoom could be “Denim and Leather Fest,” despite the fact that it must've been 95 degrees inside the Paper Box on Saturday night. I found the heat oppressive even without pant legs or sleeves, but the vest-and-boot-clad warriors that comprised most of the crowd sweated into their vintage layers unfazed. The power of metal fashion is mighty indeed. 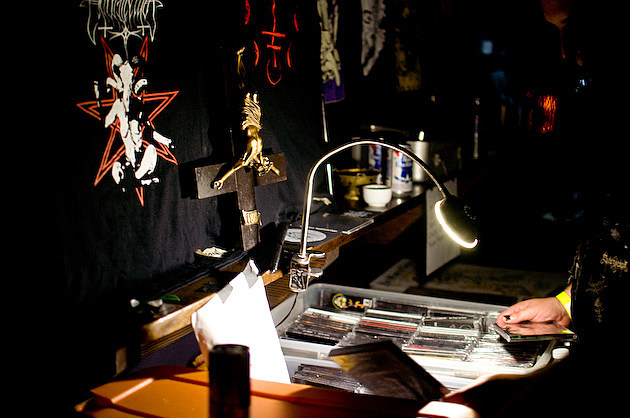 My esteemed colleague Wyatt told me beforehand that the previous night's festivities had involved pig and goat heads flying around the venue like beach ball at a Phish show, so I was prepped and ready for equally absurd antics at the Saturday event. Sadly, the stage gimmicks were comparatively restrained. Demonic Christ's frontman used a mic stand with a skull, and their bassist made awesome Galder faces all the way through their set. Thantifaxath wore robes (and had a lot of gear problems). Master Motorsåg of Bestial Mockery -- who played the only US show of their career -- arguably won the day by using a chainsaw to fill the Paper Box's sweltering main room with diesel fumes, but you'd see the same at an Exhumed gig.

For me, the clear highlight of the night was the reunion set from the classic-era New York death metal band Morpheus Descends. It continues to amaze me how different genuine 90s death metal sounds from young death metal bands who try to sound like they're from the 90s. If a bunch of twentysomethings started playing the Morpheus Descends brand of proto-slam DM in 2013, there wouldn't be much at stake; they'd just be paying tribute to a venerable tradition. But when Morpheus Descends took the stage, their stink was fresh. The simplistic riffs and abrupt transitions felt jury-rigged and dangerous -- from the gut, not the annals. 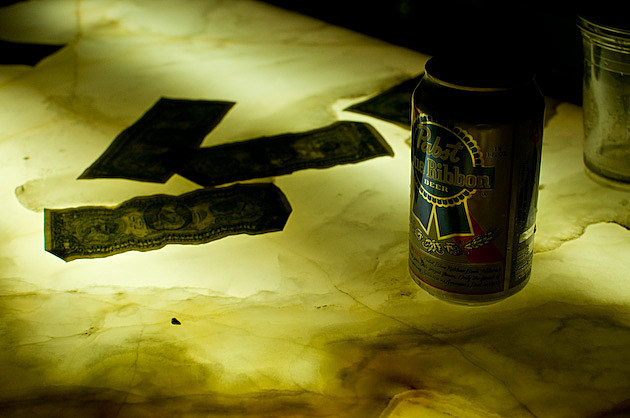 Vocalist Craig Campbell announced onstage that Morpheus Descends will be recording new material within the year. Their Martyrdoom set transported me to a simpler and more dangerous time in metal history; I hope their new recorded work does the same.

Sunday's show was not so much a part of the festival, but more of a nightcap after a long weekend. The after-show felt more of an aftermath, following a weekend of brutality in every sense of the word: poor air conditioning, broken toilets and never-ending blasts, corpsepaint and all the expected accoutrements. That probably explained some of the energy level from the crowd in the early part of the evening at Acheron in Bushwick Brooklyn, where Bastard Sapling opened the show featuring sets from Pact, Rawhide and Churchburn.

Fatigue was an enemy, yet Bastard Sapling (3/5 of Inter Arma) delivered their set with ample fury, treating the NYC crowd to a set of epic black metal jams to kick off the final stretch of a four day weekend. Churchburn and Pact also delivered strong sets, and Rawhide (members of Bestial Mockery) made their debut at the show. 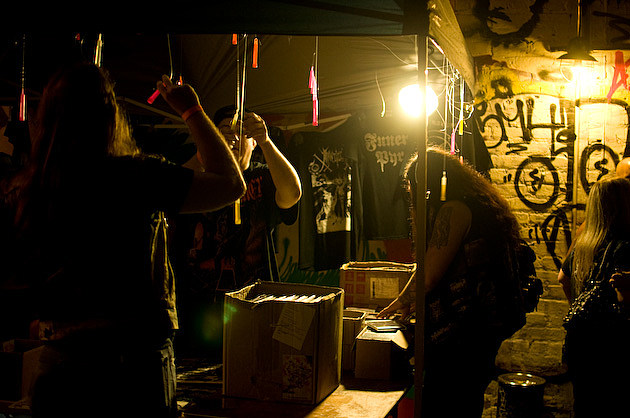 Despite so many excellent bands from the NYC-area and bills packed to the gills with talent from around the globe, Martyrdoom had a noticably absent local quotient. Many of the bands that you might think would be perfect for such a bill stood in the crowd instead, shoulder to shoulder with the sweaty, leather-jacketed throngs who braved the sauna-like heat indoors.

Martyrdoom promises a return for 2014, this time adding 50% more bands to an already four day event. Make sure AC and working toilets are included in the plans this time, boys.