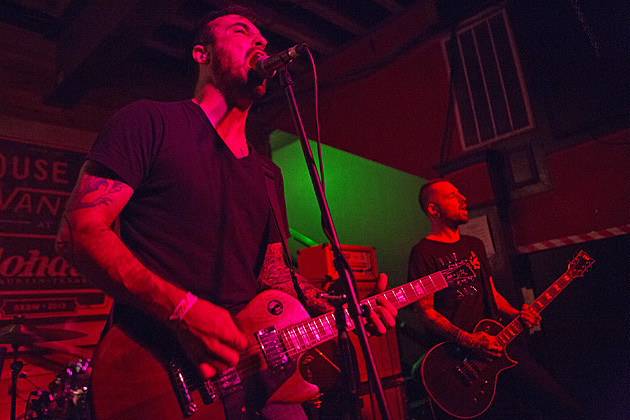 For the past two weeks New York City has been absolutely wracked by heat; thick, disgusting, oppressive heat. This is the kind of weather that keeps people in their apartments while A/C units fight a battle of attrition with the rising mercury. Despite the miserable temperatures outside, I ventured out to Brooklyn’s The Acheron Friday night (July 19th) to catch Vattnet Viskar with I Am Heresy, Astronoid, and Black Table.

New York’s (and New Jersey’s) own Black Table kicked the show off with an insane amalgamation of blackened progressive post-metal. I know that sounds like a ridiculous combination of sub-genres, but I promise you it works. These guys and gal really have their act together. The musicianship was tight and lead singer/guitarist Mers Sumida has cultivated a respectable banshee wail. The band only has a four song EP’s worth of material now, but they easily filled their 20 minute set with music.

Next up was Astronoid. This was the band’s first ever public performance and they did a respectable job despite a few minor guitar related technical difficulties. Just like Black Table, these guys are another band that’s hard to classify; there’s a definite shoegaze and black metal influence but it’s tempered with some progressive song structures and science fiction lyrics. They actually remind me of a heavier reincarnation of Hum – the 90’s cult band responsible for that song “Stars.”

I Am Heresy were the final band to play before Vattnet Viskar performed, and, if nothing else, they were definitely the most active band on the bill. Somehow, they were able to fit six band members and their equipment on The Acheron’s small stage. It was obviously cramped but, Nathan, the band’s singer, almost immediately sprung from the stage onto the floor and spent the rest of the band’s set writhing on the ground or whirling around like a mad man in front of the crowd. Musically, I Am Heresy is a hardcore band with noise rock influences. It wouldn’t be surprising to learn that these guys spent the 90’s digesting a ton of Amphetamine Reptile albums.

Vattnett Viskar took the stage around midnight and promptly announced they would be playing their upcoming debut LP, Sky Swallower (out September 3rd on Century Media Records), in its entirety. I received a promotional copy of the album a while back so I already had an idea of what to expect, but performed live the new material sounds absolutely massive. Vattnet Viskar’s live show is infected with punk rock energy that you normally don’t find in black metal bands, and that energy raised the intensity of the music well beyond the level on the studio LP. Based on their set Friday night, I’d almost prefer a live version of Sky Swallower to the studio version. And, did I mention they had fog machines?!

The only disappointing thing about the night was the size of the crowd. Maybe the heat kept people away or maybe I’m so entrenched in underground music that I don’t have a realistic grasp on a band’s popularity anymore; either way there weren’t as many people there as I was expecting. But, given the amount of buzz surrounding the band’s new album and the intensity of their live performance, I’m sure that’s not going to be the case the next time they roll through NYC.

Head below for a stream of the new Vattnet Viskar track "Fog of Apathy".