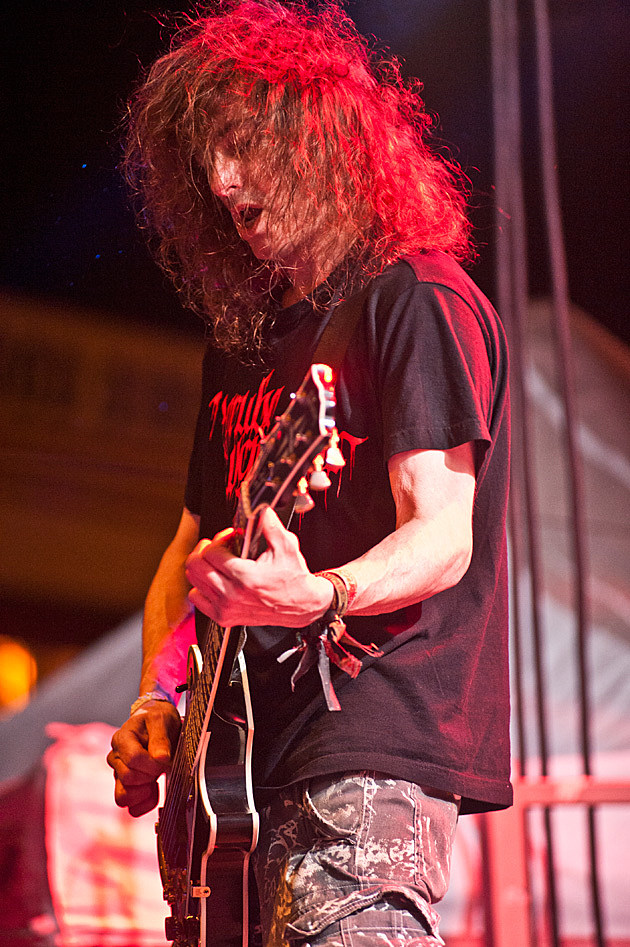 On Wednesday June 5th, 2013, Brooklyn's Music Hall of Williamsburg was an olfactory festival of BO, musty denim, weed, foot trodden floor-beer, and superhot farts as the 2013 Decibel Magazine Tour roared into town with sets by metal legends Cannibal Corpse, Napalm Death, Immolation and support sets by the great Magrudergrind and Black Anvil. With a line-up like that, the place was also a festival of incredible noise. Voluptuous, thick, tangible, shake-the-contents-of-your-bowels-loose levels of noise.

Being the dipshit that I am, I didn't read the doors/show times closely and showed up just as Magrudergrind was completing the finishing touches of getting plugged in and ready to destroy. Sadly, this means that I missed Black Anvil but it also meant that I didn't miss a single second of Magrudergrind's absolutely top-shelf set of skull shattering grind. Grindcore is not everyone's cup of tea, and like bad improv comedy, there is simply nothing more painful to experience than a shitty grind act. But Magrudergrind is one of the best grindcore bands I have ever heard in the genre's nearly 30 year existence. They are superfast, extremely loud, and absolute masters of their instruments, creating a dense sheet of raucous sound that blisters the ears. I was particularly impressed with their drummer who, while churning out textbook blast beats, also manages to have a certain natural groove to his drumming sound and technique; it never sounds robotic or mechanical. Bloody great bloody start to my great bloody evening.

Following Magrudergrind was Yonkers death metal legends Immolation. Immolation have been decimating audiences with classic death metal for 25 years and they have not slowed down one bit. This is a band who I loved during my early 90s Combat / Earache / Roadrunner-loving heyday and it really was a thrill to see them again. They played stuff spanning their entire career, but an obvious highlight for me (and I am sure many other people in attendance) was hearing Dawn of Possession from their 1991 debut album of the same name.

After an intermission that produced a line for the men's room that snaked all the way back up the stairs leading to the building's merch-zone foyer, my primary reason for REALLY wanting to see this show in the first place took the stage; Brimingham UK's godfathers of grind NAPALM DEATH. It's hard to believe, but Napalm Death first hatched all the way back in 1981 when your man Klaus was just a lad of 4 years old. Though they have had several line-up changes in all those years, the band as it exists today has been the project's most consistent line-up. And they are just as ferocious as ever. Barney Greenway screams and growls with as much intensity as he did over 20 years ago, although nowadays I feel like he's much less of a stoic frontman as he paces the stage shaking his head and his fists way more than he did when I first saw them in 1992. It was a totally energetic set that had the crowd going batshit crazy moshing and stage-diving. Personal highlights of their set included songs like "Suffer The Children," "Scum," "The Kill," "Dead," "Nazi Punks Fuck Off" and "Seige of Power".

After another intermission, the tour's headliner Cannibal Corpse hit the stage to a properly sweaty, boozy audience who were ready to tear it up one final time. Lyrically, unlike a band like Napalm Death, Cannibal Corpse's sole aim is to be super disgusting and wholly apolitical. But like Immolation and ND before them, Cannibal Corpse played a massive survey of their 25 year history. The moshing, stage-diving crowd went absolutely nuts and were even screaming/singing along to classics including "I Cum Blood," "Addicted to Vaginal Skin," "Hammer Smashed Face" and "Stripped, Raped, and Strangled." The sold out room was absolutely packed for Cannibal Corpse and they absolutely could not have cobbled together a more impressive set-list.