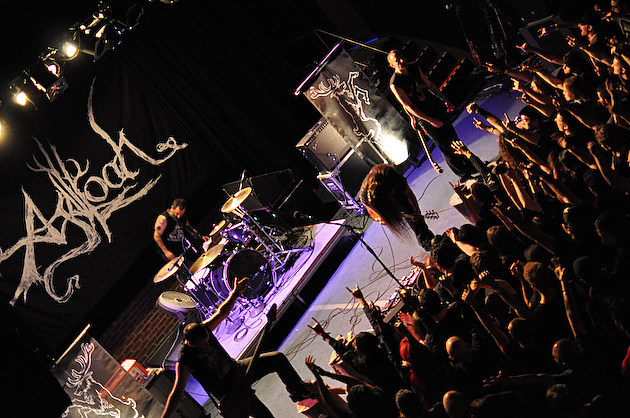 We are very pleased to announce that Invisible Oranges will be presenting Agalloch and Jex Thoth at Irving Plaza on June 30. The show will follow on the heels of the release of Agalloch's The Serpent & The Sphere, the Portland band's fifth full-length and one of the best and most anticipated metal albums of the year. The Serpent & The Sphere is out on Profound Lore Records on May 13.

For those who haven't had the chance to see Agalloch live, know that you're in for a special night. When we last caught Agalloch live at the Music Hall of Williamsburg, we got the above photograph. It was as awesome a time as that shot up top makes it look — Agalloch played for almost two hours and ripped through a set that included material from Pale Folklore up through Faustian Echoes and left the audience enchanted and the band exhausted. It was both a mesmerizing and invigorating show, and we hope you'll join us at Irving Plaza here in NYC this June when the band amazes us all again. Support at Irving Plaza will come from the folk-y, doom-y and psychedelic Jex Thoth, but other dates throughout their tour upcoming tour will include Vex and Obsidian Tongue, among others. Check out Agalloch's full tour schedule below. The Serpens In Culmination tour begins on June 18 in Minneapolis.

Our presale for this show will begin tomorrow (Wednesday, 4/16) at 10am EST on Ticketmaster, and will continue until Thursday (4/17) at 10pm EST. Check back to this post tomorrow morning for the required presale password and preorder link. The tickets will go onsale to the general public on Friday.

Again, both Agalloch and Jex Thoth are touring independently in the weeks before this show. Their itineraries to date are listed below.