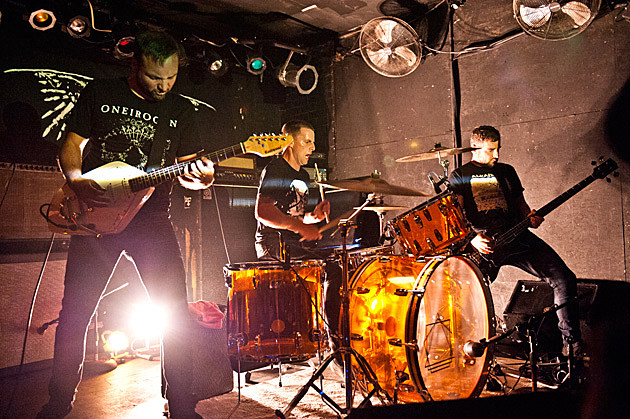 We gave you the rundown on what to expect on night one of the Invisible Oranges CMJ showcase and why you should be there when Pelican, Ringworm, Primitive Man, Aksumite, Radiation Blackbody and HASJ take over Saint Vitus on Thursday, October 17. Now Ian Chainey is back to fill you in on night two. Get your tickets to both nights while you can. —ed.

Because how the heck could we limit them to only one night? Feeling frazzled? Come back down for another dose of riff therapy. Your melon will thank you for the extra endorphins.

Who: Instrumental black metallers with a shoegaze sheen and a flare for Neurot's cinematic side.

Why: Brooklyn's own trio of innovative post-everythings created quite a stir with the torrential trems on Known Flood. It's really something worth wading into. Here's proof. Now, feel free to let your jaw hang slack at their rhythmic complexity. And, like the best live beasts, Sannhet takes it up a notch on the stage. Some groups just know how to wring every ounce of energy from the open-eye visuals provided by a projector.

Who: NYC's doom quintet shows off a hefty Pentagram hanging from their neck.

Why: While certain purveyors of the slow and low think it's only about the downtuned buzz, Kings Destroy haven't forgotten about the hooks. Their new album, A Time of Hunting, is the kind of doom made for humming, wiggling its way into your noodle and burrowing there for the foreseeable future. Giant riffs are awesome when magnified by the collective "yes!" shouted by your fellow audience members. A ridiculously catchy chorus? Even better.

Why: Wreck & Reference wields an MPC and the sounds they're able to produce with that piece of machinery is a sight to behold in itself. Toss in the manic playing of their drummer and you've got a set designed to make you hold your breath. They've made a bit of a boom on Bandcamp, but their concerts appear to be another natural habitat.

Who: These vets from Massachusetts specialize in anthemic sludge-ups complete with a nasty guitar tone.

Why: Phantom Glue plain rock, reveling in ten-ton grooves made to snap your spine. A War Of Light Cones, their months-old stunner, is a Santa Ana of fresh air and is ready to power the forearms all of Saint Vitus's invisible guitarists. Hell, chills materialize while pumping their disc through crappy car speakers. Imagine your reaction when the house is shaking thanks to the amp stacks.

Who: Next-level death metallers arm an arsenal of skillfully constructed h-bombs while ruminating on the fallout.

Why: With the ink drying on their Relapse contract, the Brooklyn busy-bodies deserve a victory lap. Still, true to form, they'll take the opportunity to ensure this is a night you'll cherish. On record, their tech-death twists are of the hold-on-tight variety, like a car chase scene transformed into precise blasts, gnarled runs, and piercing timbres t-boning into other atmospheric textures. In person, it's even more harrowing. A certain familiar growler is a man-possessed with a mic in his mitts. His energy is addictive. Even if you stop by bedecked in an Outbreak suit, you can't guard yourself from Pyrrhon's infectious energy.