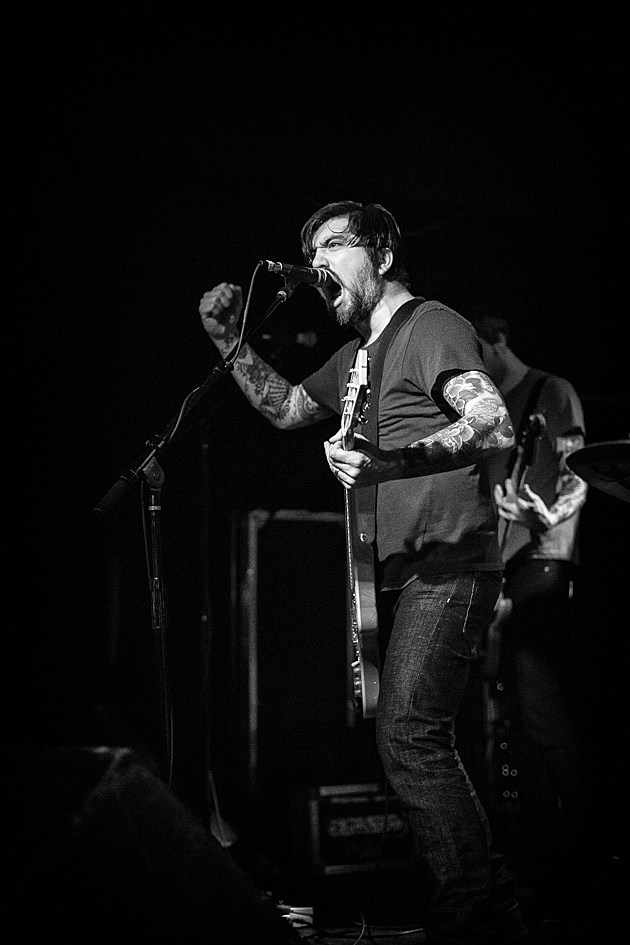 IO readers will probably know Nate Newton best as the bassist for the now-legendary metallic hardcore band Converge. With that group, Newton has contributed to some of the most critically acclaimed music of the last decade. Less well known, though still excellent, is his work with Doomriders, his more fun, rocking side project, wherein Newton both plays guitar and serves as primary screamer.

Screaming runs in his family―he chatted with me while taking care of his new infant daughter, who has obviously inherited her father's pipes. In between paternal responsibilities, we discussed the new Doomriders album, Grand Blood, as well as the high cost of a crazy live show, and Newton's favorite Kiss album.

Grand Blood came out yesterday; you can purchase it here.

The first thing that really sticks out on the album is [new drummer] Q's drum rolls all over “New Pyramids.”

His drumming on this record is savage. I think he might be the standout on the record, in my opinion. His contribution is what pushed the energy level up so much. He pushed all of us, and got us really excited to write.

Yeah, I think so too. We didn't want to write an overtly metal record again. I don't want to sound like a pretentious jerk or anything, but I just got a little bored of it. I've done that for so long that I just wanted to write some good songs. That's always been my main goal, but on this record I just thought about how in every other band I was in, I was just screaming at the top of my lungs. That comes fairly easily for me. I wanted to challenge myself vocally, and in order to do that, the songs had to benefit from it.

I'm just excited to see you live again; you're always a blast. I actually headbutted your bass once. Sorry.

It's okay, it deserved it. One time that did happen, though, and there was a big chunk of hair that got ripped out and stuck to the strings. A little bit of scalp, too. It was pretty funny for me, but not for the other guy.

At Converge shows especially, wild stuff always seems to happen. Before I ever saw you live, I saw this video on YouTube where you broke your bass over a man, or so it looked in the video.

It just looks like that, but that's not what happened. Oh man, I'm so ashamed of it. That's one of the worst thing I ever did in my life, honestly. It looks like I hit the guy in the head, but I didn’t. He was holding this other guy in a full nelson while a third guy was punching him, and I hit his arms to knock him off the other guy. I could have just put my bass down gotten in the middle and said stop, though. In retrospect I look back at how stupid that was and I wish I hadn't done it.

I understand the guilt. At the same time, you were in an extreme situation with people doing extreme things. Your reaction was understandable.

Kinda, but ever since that happened and that video got on the internet, people think that they can do dumb shit at our shows and we'll be cool with it. I hate violence, I really do, and that's one of the rare occasion in my life where that kind of anger came out of me, and it really makes me sick, honestly.

I've never seen a Doomriders show. Do Doomriders crowds act the same way, or is it a bit different?

It's different. It varies from city to city. Some places we play and it's a big drunken party with people dumping beer on themselves and throwing things and jumping off the stage. Other times, people just stand there banging their heads. Other cities it's everyone giving us the middle finger because they hate us. We've done some tours where we didn't really fit in with the other band. Which is cool, I like doing it, but it makes every show an uphill battle. Which is also good; it forces you to put your all into it. But yeah, we've definitely played some shows where people are not into it at all.

That won't happen this fall. You're touring with Kvelertak and High on Fire.

This is the perfect tour for us. Not only are they great bands that we fit with, but they're friends. It's gonna be a blast. I can't tell you how excited I am, not just to play every night, but to hang out with my friends for a few weeks.

How do you prepare for a tour like that, with two powerhouse live bands?

Yeah, we've got to bring our A game. Honestly we don't prepare too much. We just jam, learn the songs, figure the set list out and go. If you've ever seen Doomriders live, and you've heard my awkward stage banter between songs, you can tell that not a lot of thought goes into it

You always have the funny stage banter in Converge, too.

Yeah, that's because I am so totally self-conscious. I just don't know what to say, so I make an ass of myself just to try and make people laugh. That goes all the way back to elementary school, being the class clown. It's all to cover up that I have insane stage fright.

I would never have guessed that.

People always say that, but every time before I play a show, I am backstage terrified. Afraid that I'm going to screw up. It's weird, but I think it's something a lot of musicians have and it's why they have these big goofy personas onstage. It's tough to explain. Especially in Doomriders, because I'm the quote-unquote frontman, there's a lot more weight on my shoulders to carry the whole thing and keep the flow going throughout the show, and it freaks me out because I don't know what to say or do. I try to make myself laugh, I try to make my bandmates laugh, and I try to make everybody in the audience laugh. Sometimes it works, most of the time I look like a complete ass. Now we have a lot more material so we have more ability to kind of keep playing, which is what I prefer to do. I want everyone to have a good time.

How do you put the set together?

There's a number of different ones. There's one song in particular called “The Chase” that Jeb, our bass player, sings on. It's really mid-tempo, a head bobber, but it's good to throw in the middle of a set because when I'm usually screaming my head off, it gives me a bit of a rest. “Jealous God” is a good song to let everybody tune but build some tension, because it opens with me just hitting that one note for a while, so we can kind of raise the intensity using feedback, different effects and things. It's like when you sequence an album. You want it to take you on a journey.

The new one's sequenced really well―the last four songs, from “Back Taxes” into “Gone to Hell,” just blitz to the end.

The last record was a lot more expansive―I think we put too much material on the last record. With this one, I wanted you to put it on and listen from beginning to end. You have a record like that, that is paced so well that when it ends you want to start it all over? That was the goal. Think of the album like a Pixies song. You need to have the loud and the quiet, the fast and the slow. We're all just really excited to play all the new songs. If it was up to me, we'd just go out and only play the new songs.

Sometimes I love that, but then sometimes I feel like, “Shut up and play the hits.” It's awful. It just depends on the night.

Yeah. And it depends on the band, too. Like if I saw KISS and they didn't play the songs off Destroyer I'd be pissed.

Is Destroyer your KISS album?

It's the one. I love Destroyer and Hotter than Hell. There are so many anthems on Destroyer; “Shout It Out Loud.” I've gotten into arguments with people who don't like KISS because they think it's beneath them or something, and I'm like, “Well, you're an asshole. KISS is fucking great. If you don't like old KISS, then you don't like fun. You don't like rock and roll.” Like take the makeup and all that stuff aside, those are good, fun rock and roll records.