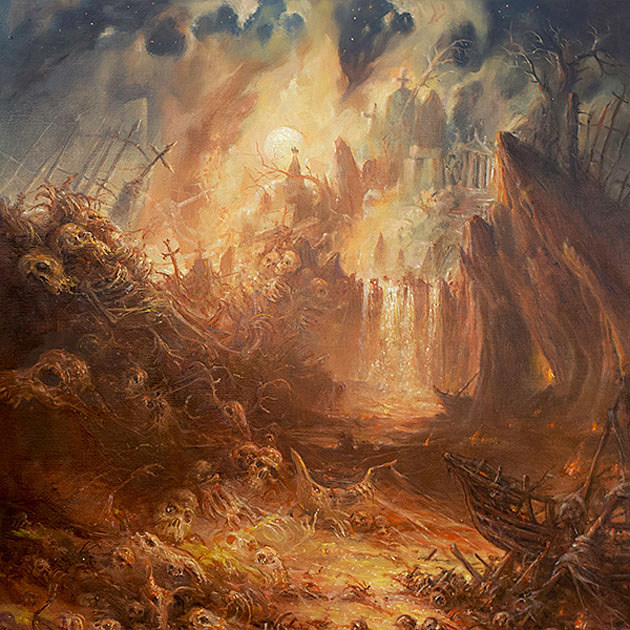 How appropriate that Oakland’s Lycus should title their full length debut Tempest (20 Buck Spin). Over the course of three tracks and 42 minutes, the funeral death doom quartet manage to create a colossal storm of sound that swells and shifts with the same unforgiving nature as the title suggests. The accomplishment of Tempest is equally footed in the composition as well as the lyrical delivery. In the relatively short time span of the record, the band delves into the nuances of black metal while maintaining the common thread of its doom underpinnings. Rarely is a band able to fully encompass the atmosphere touted by its album title, yet Lycus succeed on virtually every level here creating a record that’s as sonically massive as it is malleable.

I had the opportunity to ask guitarist/vocalist Jackson a few questions about how the album came together and what he saw as their greatest challenge during the writing process. Lycus begin the first part of their Tempest tour tonight in Los Angeles at the Five Star Bar. The tour runs through July 27, ending at Terminal in Oakland. Announcements for the second part of the Tempest tour will be coming soon.

What thread brought you guys together to form Lycus? What’s the story behind the band’s inception?

Well myself and the other founding member Trevor formed the band back in 2008 in the greater Sacramento area. We had gone to high school together and our similar musical tastes lead us to start jamming together. Eventually Lycus was formed and we had a solid year of several live performances, and released a self-released demo. Eventually, maintaining a line-up proved difficult and we disbanded. Trevor and I remained friends and eventually decided to relocate to the bay area in the summer of 2010. Shortly thereafter we reformed Lycus with new members and recorded Demo MMXI.

With Tempest, what was the writing process like both lyrically and musically?

Tempest was unique from the demo as it was much more collaborative and written throughout the course of two years as opposed to a couple months. I believe this resulted in much more refined songs (we even completely scrapped a couple songs we felt didn’t make the cut). Usually the songwriting process will start with a couple riff ideas and then progress from there as the band jams on it. Lyrically I would say Tempest is much less political and more personal in it’s themes. Trevor wrote most of the lyrics though I contributed lyrics for my clean vocal parts.

What challenges are you (or the band) faced with from a creative standpoint considering the fact that the metal genre is almost oversaturated?

The true struggle as a metal band these days is creating music that is interesting and unique. When it comes down to it, it has all been done before. The key is taking what’s been done before and adding your own unique take on it. I feel Tempest pulls from our wide array of influences to create a sound that is very much our own, an amalgamation of each member’s different music tastes.

What’s been your (or all members) journey as a musician? What was and is it about heavy music that you feel continues to inspire you to create?

I can’t speak for all of our personal musical journeys, but I feel the four of us have come together inspired to create meaningful and emotional music that has an impact on the audience/listener. Heavy music speaks to the soul in ways that other music simply cannot penetrate. It isn’t easily accessible and you have to have an ear for it to discern the different elements and subtle layers. In addition, there is so much possibility for innovation and drawing little pieces of the many subgenres together to create something altogether new. You can’t really say that about many other styles of music.

What do you see as the greatest detriment to the heavy metal genre in 2013? To what do you attribute heavy metal’s popularity increase over the last five to 10 years?

To me the greatest detriment would be, as you mentioned, the oversaturation of the ‘scene’ with mediocre doom and black metal bands seeking to cash in on the new (shall I say ‘hip’) trend. I’ve been seeing the rise of doom metal as a more popular genre in recent years, but for the most part have encountered few bands I actually respect and actively listen to. That is to say hardly any of the new bands pique my interest and are probably just riding the bandwagon until the doom craze runs out.

Do you (or any of the band members) enjoy reading and, if so, what’s been piquing your interest lately?

I’ve taken it upon myself to finally finish the book Endgame: The Problem Of Civilization this month. This book is one of the most brutal and depressing critiques of industrial civilization and it’s detriments to the natural world. In fact, I tried reading it a couple years back and was so depressed I had to stop half way through [laughs]. I also recently read a book titled In Search Of Respect, an interesting ethnography of a crack house in East Harlem.