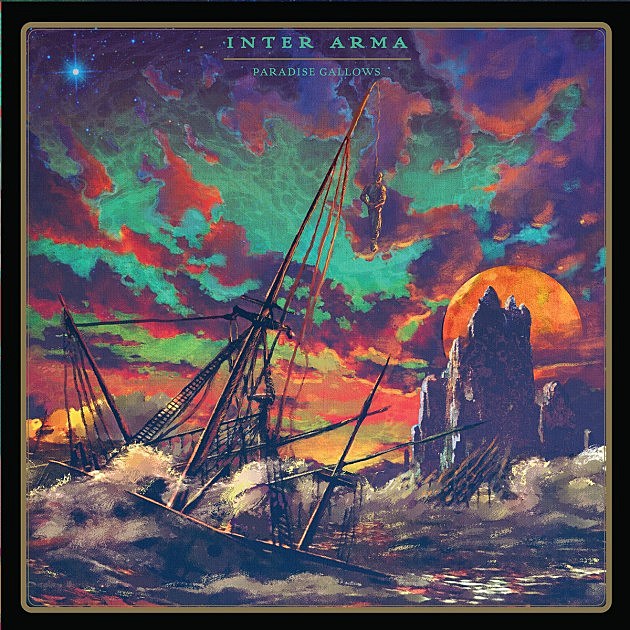 Richmond’s Inter Arma are one of the more forward-thinking bands in metal today, but there’s still something very classic about their approach. In blurbs, they’re often described as some kind of extreme metal cocktail. Relapse’s own press release for their new album Paradise Gallows pitches their sound as a “blend of doom, post-metal, sludge, avant-garde, black and death metal.” Given the number of sub-genres in play, there’s a concern that the music might be too schizoid, or that the band is just trying to hedge their bets. But what makes Inter Arma so effective is that no influence or technique is allowed to take precedent over songwriting.

Although most of the tracks scrape toward or past the 10-minute mark, they never turn into disjointed riff stews or soporific dirges. Instead, they feel like memorable compositions worked over and over in the jam room. Each individual part has been stretched out or condensed to determine its maximum impact, allowing room for the influences of each of the band members to come to bear without ever doing too much.

The group’s debut, Sundown, found Inter Arma still figuring out how to pin down a sound this massive and diverse. Follow-up Sky Burial mastered the formula because the group started building their epics around a singular strong element, like the big Galactic Empire riff that opens “The Survival Fires” or the plate-shifting drumline that wheels through “’sblood.” After 2014’s brilliant longform song The Cavern, Inter Arma continue to run up the score here with an album that sharpens, rather than redefines, their sound.

The intro “Nomini” features acoustic guitar and smooth electric leads that suggest the band may have been bumping some Camel lately, but the peace is quickly broken by T.J. Childers’ roto-toms kicking into “An Archer in the Emptiness,” one of the band’s heaviest and darkest songs yet. “Transfiguration” is an archetypal Inter Arma song, a menacing riff buffered by a sludgy midsection filled with torture shack guitar squalls.

Gallows takes a long, stoned detour through the desert with the next two tracks, the “Nomini” motif returns in a lighter-raising interlude, and Act Three is ushered in by the slow-burning title track. Vocalist Mike Paparo has drawn acclaim in the past for his expressive bellows, growls and wretches. Here, he tries out something new: a smoky croon that evokes Michael Gira in some of the more restrained moments in Swans’ recent work. The song accretes volume and severity as it unfolds, capping off with the lyric “laughing all the way to my grave.” It’s a gloriously exhausting listen, and sure to be a setlist highlight for many tours to come. After “Violent Constellations” winds through 11 minutes of death-prog, Gallows concludes with the cryptic country-inflected “Where the Earth Meets the Sky.”

It’s an album best digested as a whole—the separate tracks coming together like a long trek through harsh American terrain. Inter Arma are masters of tension and release. They build up to crescendos of screaming guitars and madman drumming and then, eventually, a new song will emerge out of the thick haze of the previous one. All the hard work and careful manipulation of details pay off in an album that feels not like a mere exhibition of styles, but a uniquely evocative listening experience.