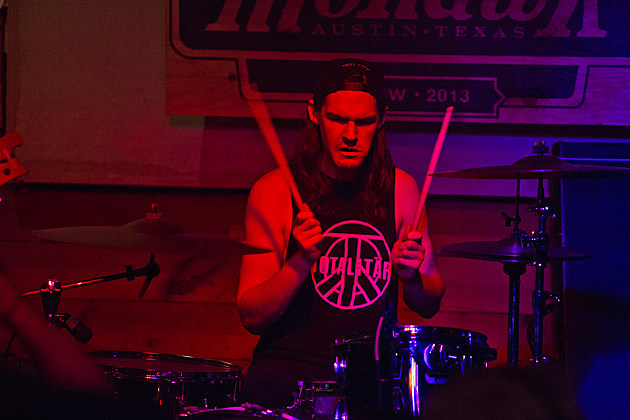 It takes some serious cojones to name your band after an early Napalm Death demo, but luckily Austin band Hatred Surge can back it up. The primary project of bassist Alex Hughes has focused much of the past few years as a grind/powerviolence trio with Chris Ulsh on guitar and a revolving lineup of vocalists along the way (members of Insect Warfare & Mindless have blessed their ranks). In between splits with The Endless Blockade, Mind Eraser/Iron Lung and more, the band has evolved considerably. Their latest offering from the forthcoming Human Overdose LP is a whopper, but not in ways that you'd expect. "Skinjob" (a Blade Runner reference?) definitely skews more toward the death metal side of things, galloping along with the weight and power of a fully-loaded semi. Stream the new track below.

Related band Power Trip, which features Chris Ulsh on drums, is a whole other animal. Clearly the bastard sons of crossover thrash, Power Trip follows in the footsteps of bands like Leeway, Best Wishes-era Cro-Mags, classic Anthrax and DRI to create furious crossover thrash that gets to the roots of the genre, hardcore. Their live show is no slouch either; I first experienced the band at a BrooklynVegan Fun Fun Fun Fest aftershow in 2011, turning the Red 7 indoor space into a warzone after the extremely popular Touche Amore.

Power Trip is readying the release of Manifest Decimation via Southern Lord on June 11th. Stream a track from that release below.

Noticing a trend? Well another Chris Ulsh project, not counting service in the backing band of Justin DeTore's death metal project Innumerable Forms, is Mammoth Grinder. The band is Ulsh's primary song-writing outlet, focused mostly on brutal death metal. After releasing Extinction of Humanity a few years ago, the band is preparing to release a new LP as well though label/date is not known. Details on ther release are on the way, but until then you can stream their last LP and their split with Hatred Surge below.