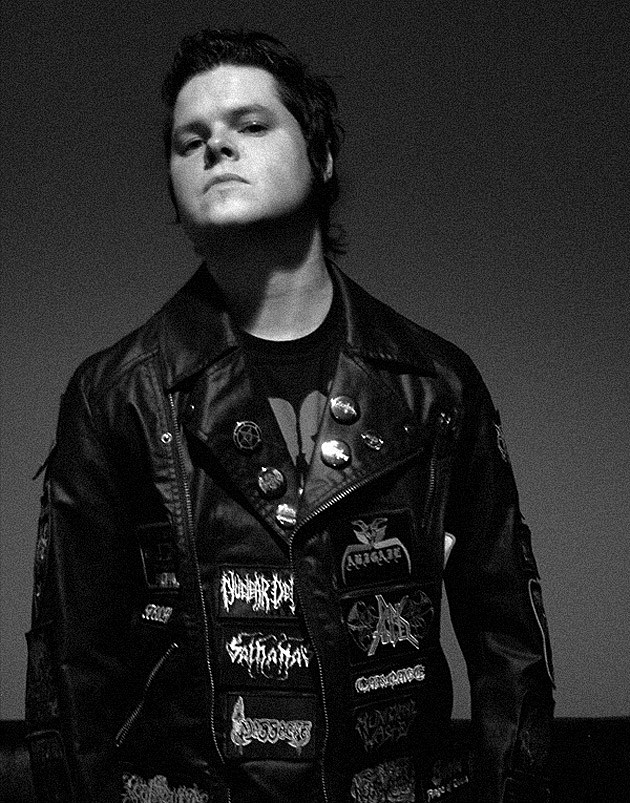 You’ve seen Mark Riddick’s artwork. Even if his name is unfamiliar to you, any fan of extreme metal has come across Riddick’s black-and-white illustrations of inverted cross-clutching revenants and festering, desiccated skulls. Maybe it was on the cover of an Arsis album, all of which bear original Riddick work. Maybe it was in the margins of PIT Magazine, ages ago, where Riddick’s bisected corpses with toothed innards framed articles on the underground’s finest. You might have just seen his stuff on a shirt at a show, which would be unsurprising given that the man has done work for everyone from Devourment to Dethklok to Morbid Angel to the Black Dahlia Murder. For all we know, you’ve seen it in your dreams—Riddick’s surreal style is the kind of imagery that most fans of this music intrinsically know, somewhere, in their warped mind.

On the phone, Riddick is, of course, the nicest guy in the world to talk to. As much of a fan as he is a contributor, he asks the Casserole about bands he’s interviewed, and sounds genuinely impressed at the mention of talking to folks like Kerry King, seemingly unaware how accomplished I feel to be getting a chance to talk to Mark Riddick. At the end of the interview, he grills me on my own band, and via mail we exchange CDs; Holy Destroyer, the riffy latest by his solo effort Fetid Zombie, comes with a patch, a button, and a ton of classic guitar leads. If Mark Riddick isn’t old school, I don’t know what is. 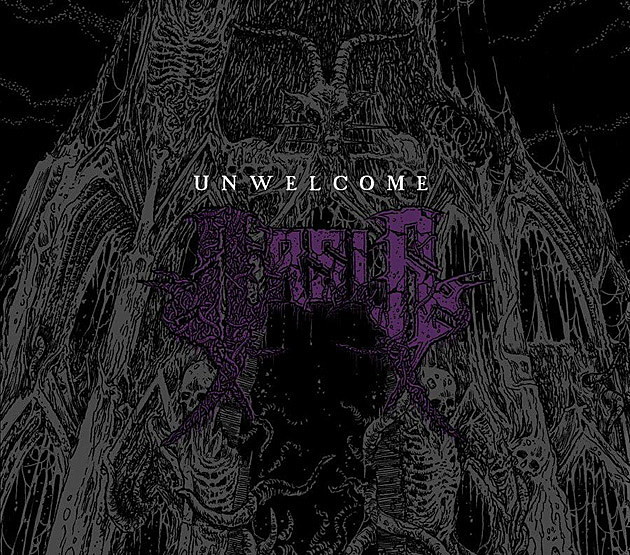 Growing up, did your love for metal and drawing grow up together, or were you into one before the other?
It was sort of in unison, as you described. One of the experiences that put me in the direction of doing album covers was, I went to a record store with my dad and my twin brother, and I saw Killers by Iron Maiden on a record store shelf. Seeing that just sort of the blew my mind. I was six years old at the time, and I remember thinking, Huh, that’s really cool. And it just really stuck with me. I didn’t get into metal until I was about ten years old. I started getting into rock music, and it just progressed. By age twelve, I was into thrash and listening to bands like Demolition Hammer and Cryptic Slaughter. By age fourteen, I was getting into the death metal underground scene. And during this whole time, I had a real interest in art. I always drew in my spare time, and had fun with it, but getting into the underground death metal scene really gave me an outlet for my art. It just stuck with me. Ever since then, I haven’t stopped.

It’s funny you mention Killers, because you have a really distinct style, especially the rotting skull look. When did you notice this specific style of yours beginning to take form?
Probably around 1993 or so. Just a couple years of being in the underground scene and doing work for bands, my style started to formulate. I think it’s something that still evolves to this day. I think all artists are always evolving, always progressing. They’ve never accomplished their masterpiece. I think it’s something you’ve gotta just keep doing, keep learning new things and absorbing techniques. In my style, there are always a few things—one would be the black and white approach to everything I do. That’s certainly something that’s been consistent from the beginning. That was just from that first year in the underground scene—all of the covers for demo tapes and stuff were photocopied on a black and white copier, so all my artwork had to be in black and white. That’s something that’s been consistent for over twenty years. As for the subject matter and creatures within my art, it’s still an evolving thing. It’s not really set in stone. I was just going some stuff from a year ago, and seeing how much things had changed. One thing I’ve changed is, instead of using Adobe Photoshop to color my backgrounds black, I’ve been going back to using black magic marker and white ink pens for my art. I’m really trying to avoid using a computer at all unless it’s necessary.

Shit, man—pen and magic marker? How big a canvas are you working on?
I get a lot of questions about what supplies I use. People think there’s some kind of tool or trick to making art, but it’s really just about practice. I stick with the most basic things I can possibly use. A lot of my stuff, you’ll find, I’ve just done on regular old printer paper. Nothing fancy, nothing extravagant. Lately, I guess I’ve been using a heavier stock—a cover stock—but then, just some simple rollerball pilot pen. Anything that makes a black mark on a piece of paper. It’s all about just having an underground attitude to the way things are made—the do-it-yourself approach.

Do you have a studio? Do you work out of home?
I have a full-time day job as a graphic designer, so obviously I have to report to an office for that. I do have a studio in the basement of our house. It has a collection of artwork from other heavy metal illustrators, so I always try and find time to put in a couple of hours down there. But honestly, I just draw at my kitchen table or my dining room table, just so I can be close to my kids and my wife when I find five minutes to draw. Having a full time job and a wife and kids, it can be hard to find the time to illustrate, so when I do have the chance to draw, I take it. Sometimes I’m at the pharmacy waiting for medication, or I’ll be waiting for my car inspection to finish, and I’ll bring my art with me for the chance to draw. 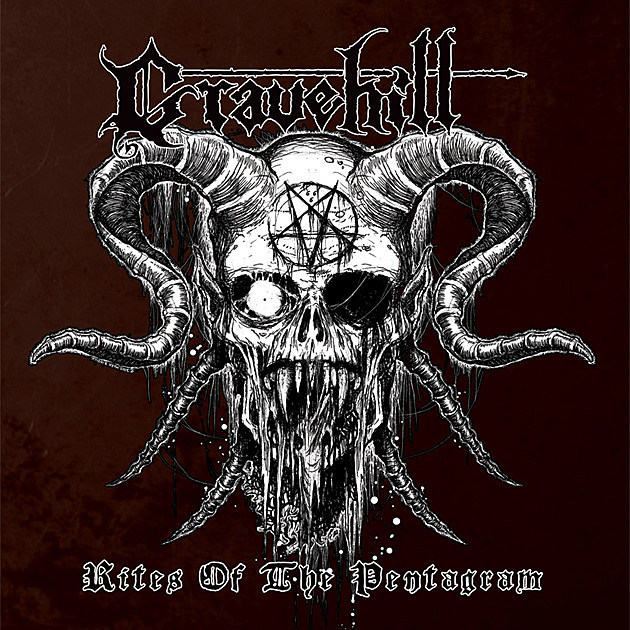 How old are your kids? When they walk by and find you drawing, say, a giant rotting bat with carnivorous intestines, are they just used to it at this point.
Um…yeah! [Laughs] My wife doesn’t really pay any attention to what I’m drawing. If I show her something, she’s like, ‘Oh, that’s nice, honey.’ She’s cool with giving me a minute to draw. My daughters two and my son is five, and they’re pretty oblivious to it. And that’s fine with me—I don’t want to freak them out. They seem okay.

When a band comes to you, how much of a concept do they have? Do they show up with a formed idea, or do they just want a Mark Riddick piece?
Usually they come with something in mind. Sometimes they have something that’s out of the ordinary. But sometimes they just come and say, ‘Hey, do your thing,’ and that’s personally my preference, because it means I’m going to get the job done faster, just because I have a way of things. But I try to live up to their expectations. They pretty much know what they’re going to get when they ask for something. I try and make sure they have a sketch to review, so that before I start inking anything it can be approved. So 98% of the time it works out pretty well. Not all of the ideas in my art are my own. I try to be pretty open to what bands come to me with.

Part of the reason I ask is because a lot of your art is very…psychedelic is the wrong word. It’s surreal—it’s rarely a zombie or the devil, it’s sort of a crest or a series of images put into one hyper-image. I wonder if bands come to you with that.
Some bands are very specific, some aren’t. Some bands leave it up to my discretion, but some bands are very, very particular and I need to make it right for them. They’re clients. So it’s all being translated through my own filter, through my own sensibilities. Someone like Matt “Putrid” Carr would probably turn out something a little different from mine. 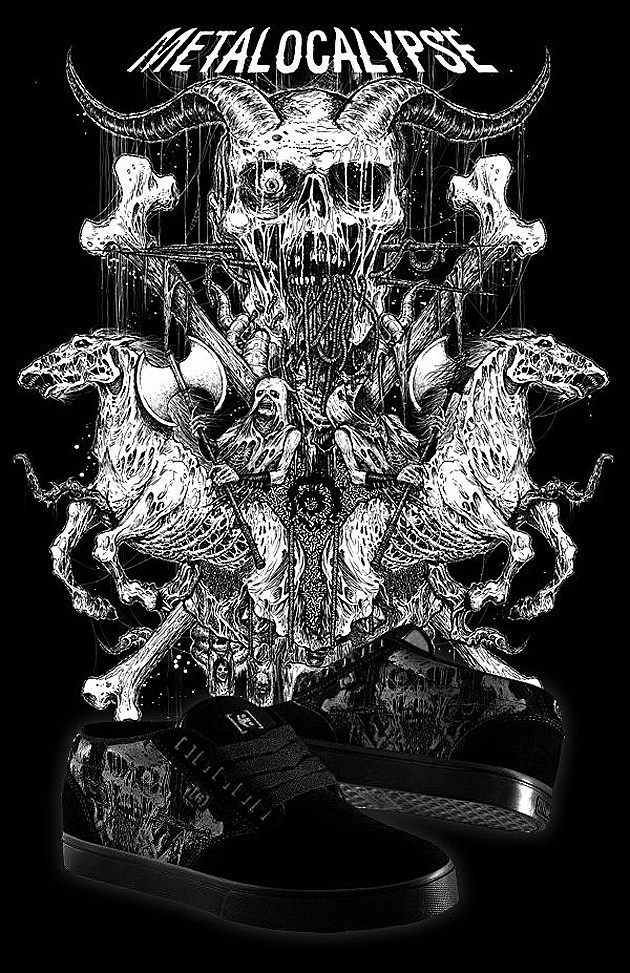 Weird question: in your art, and in the art of guys like Chris Moyen, there’s this image of a bipedal heavily-armed goat—the goat-soldier. Where does that come from, and what does it mean to you?
The goat imagery is obviously very present in my own art, and I’ve got to say, Chris Moyen has been a big influence on me since the beginning. He’s been in the scene since ’87, ’88. I consider him my European counterpart. As far as the goat theme, I couldn’t say a hundred percent where it’s derived from. I think it’s something Chris has made very graphic, especially in the black metal scene. For me, I view the goat as the Adversary. I’m not Satanic, though I am atheist, and I view the goat as an adversarial creature. I think it’s something people can relate to within the metal scene.

How often does your stuff get ripped off? Is that an issue for you?
It has been. It’s been that way since the early 90s, people ripping stuff off from magazines or off of the covers of demo tapes. It used to be pretty regular, these days it’s once every few months. And I don’t go looking for it. It’s just that people point me in the direction of, ‘Hey, your stuff was stolen on this and that.’ Most of the time, I don’t even contact the band to tell them not to do it. But it’s really about my client, who paid for the artwork specifically for their band—it’s really damaging for them. My client has been ripped off. For me, my art has just been reproduced again. 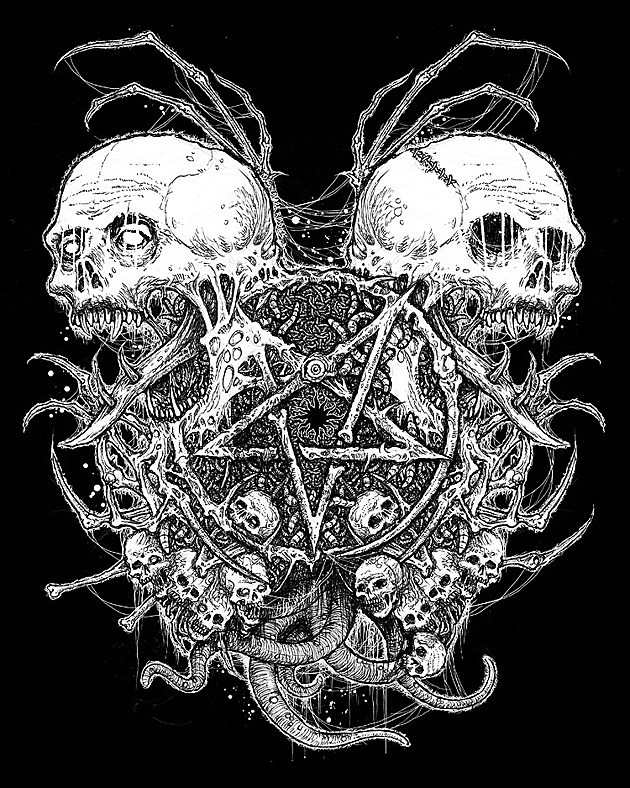 It’s not like you’re creating art for bands that are wallowing in money, either. These bands put something of themselves in their art.
Yeah, but there’s a mentality that if it’s on the Internet, it’s free. People don’t have that clear understanding that this is somebody’s creation and you need to respect it. A lot of it just has to do with maturity level too, you know? A lot of the people doing that are teenagers, and they just don’t understand that someone worked hard to make this happen. It takes time for people to learn that. I think for a musician, an artist, a writer, you just have to be really comfortable with yourself. With a musician, you get ripped off on the Internet, but before that it was tape trading. It’s something you’ve got to get over

You have the full-time job, the family, the artwork—where do you find time for the bands you’re in?
Oh, God. I mean, the music is definitely not as much of a priority as my family, or my artwork, or even my job at times. So it’s mostly something I like to do when the inspiration hits. It’s always been a creative outlet—I’ve actually been playing an instrument longer than I’ve really been taking my art seriously. So, like any musician, you make music that you want to hear. That’s what it’s for. Finding the time, it’s usually late at night. I don’t sit around rehearsing all the time or whatever. It’s usually either solo work or collaborating with people online. It’s just something on the side. I love metal music, I love making metal music, and I love being able to contribute to it.