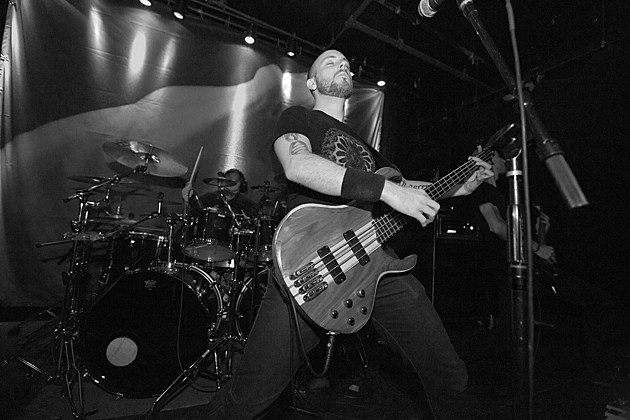 I first heard Inter Arma back in late 2012. They were fresh Relapse signees at the time, on tour with new labelmates Royal Thunder and 2012's it-band Pallbearer. My first exposure to them was their set at the tour's Brooklyn stop. (You can read a full writeup here.) They made an instant fan of me. Since then, they've released one of last year's best albums, and have spent more time in the van than virtually any other American metal band over the same period. I've seen them three times since; they get better every time. By the time Inter Arma hit the road with Ulcerate this spring, they'll have another sizable tour under their belt — their ongoing jaunt with Russian Circles and KEN mode, whose Jesse Matthewson recently called them "the best band in America right now."

When Ulcerate last made the trek from their native New Zealand to North America in 2012, they were robbed in NYC after a triumphant show with Tombs and Svart Crown. They soldiered on; their eventual MDF set was even better than the BK appearance. But still, I worried that the experience would sour them on the prospect of returning to the States. Fortunately, it did not.

If Ulcerate's recorded work has a significant flaw, which it arguably does not, it lies with the cerebral nature of their compositions. If you're in the wrong mood, their albums can register as desiccated academic exercises: all brains and no heart. But when you experience Ulcerate in person, their music comes alive; they invest their performances with the gut-fueled fire that animates all great death metal bands. The brains remain, and your heart pounds enough for two.

These two bands share several common features: both on Relapse, both influenced by Neurosis in an unconventional way, both excellent live. The most important feature that they share, though, is that they're both exemplars of metal's capacity to produce thrilling mutants: bands that take old components and process them into something unique, exciting, and fresh.

Catch this tour or you'll regret it. Dates and streams of each band's recent work below.