A Life Once Lost in Brooklyn, March 2013 (more by Fred Pessaro) 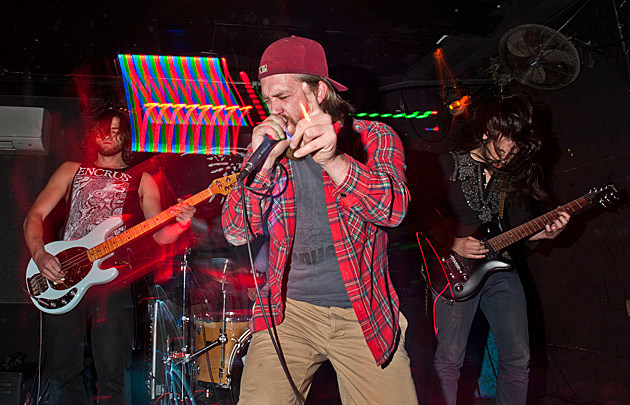 On July 12, Philadelphia's A Life Once Lost announced their break-up. It did not come as any particular surprise—their 2012 album Ecstatic Trance was released to light fanfare, and the band's live tours after its release were brief.

I'm sorry to see the band go. A Life Once Lost did not have a consistent discography, nor did the band have an easily traced narrative—no steady rise to fame, no explosion of popularity followed by sudden silence. The band's discography and life cycle peaks and valleys in rapid succession, and as a result the group will probably not be remembered as legend by the metal media. But even for their inconsistencies, A Life Once Lost's music was forward thinking, and in many cases very good.

I call myself a fan of the band, but not a fanatic. My first exposure to the band was at my local record store, where I came across a copy of the band's then-new album Hunter. The desk clerk at the store has known me for a long time, and was aware that: A) I had a history of purchasing metallic hardcore albums released by Hydra Head and Deathwish, and B) I was rather fond of Meshuggah. With that in mind, he recommended the album, and when I did not have enough money to purchase Hunter, he cut me a deal on a used copy of A Great Artist.

And that exchange demonstrates the most persistent problem with the popular conception of A Life Once Lost. People call them "the metal core group that sounds like Meshuggah", and in so doing, cheapen the music. A band sold as a re-interpretation of another band faces an uphill battle in the hearts and minds of potential fans (this is also the problem I have with those "for fans of ___" stickers that come on the front of CD's). Admittedly, Meshuggah was a big influence on A Life Once Lost's music: both bands employ chunky riffs in polyrhythm. However, A Life Once Lost's sound changed, often quite drastically, from record to record. 2000's Open Your Mouth for the Speechless . . . In Case of Those Appointed to Die is a condensed, spastic record that at times evokes Earth Crisis and Candiria with a little Quicksand thrown in for good measure, but the last album before their hiatus, 2007's unfairly-maligned Iron Gag, sounded more like Pantera, complete with pick-squeals and blue notes galore. By the time they recorded Ecstatic Trance, the band's sound had been focused to a singular point. The metal media, however, seemed to gloss over how much A Life Once Lost mixed their sounds up from record to record.

A Life Once Lost will probably be remembered most—in years time—for innovating dent long before that word was used to describe a kind of music (for a precise estimate, A Life Once Lost used palm-muted polyrhythms with mid-gain distortion on A Great Artist, released in June 2003, by contrast Misha Mansoor formed Periphery in 2005). Wether you think djent is a 'real' sub genre or not (for what it's worth, I think it's as legitimate as Gabber is a legitimate descriptor of electronic music), the style might easily be described as a mixture of Meshuggah-style riffs and melodic post-hardcore histrionics. Keeping that in mind, remember that A Life Once Lost collaborated with Anthony Green of Circa Survive and Saosin, among others, on an unreleased cut of "A Falls River Farewell" from Open Your Mouth . . . . Green also showed up on "All Teeth" from Iron Gag album.

Their newest album, Ecstatic Trance, did not sound as if it was in conversation with the djent scene, however—if it is, the only line of dialog is a monosyllabic roar. Ecstatic Trance sounds like The Hunter expanded in two directions at once: psychedelic and industrial. The album revels in the merciless pounding of mid-90's Ministry and post-reunion Killing Joke—the Japanese edition's bonus track was a telling cover of "Asteroid". But in those same songs, Guitarist Douglas Sabolick dances around his own palm-muted riffs with chorus-drenched guitar leads reminiscent of The Edge and the Reid brothers. Meanwhile, Robert Meadows delivered a savage vocal delivery. The songs do not alternate between those extremes—they explore them all at once. It makes for a dense, challenging listen.

After a five-year hiatus, A Life Once Lost released Ecstatic Trance through Season of Mist records, a seemingly ideal match after a series of short and reportedly rocky stints with labels like Deathwish, Ferret Music, and Roadrunner. Season of Mist released Dillinger Escape Plan's Option Paralysis in 2010, another legacy progressive metal core album, which wound up being a critical success, deputing in the top half of the Billboard 200. Season of Mist also has a positive track record with releasing progressive metal comeback albums after extended hiatuses (Confessor, Atheist, Cynic).

I reached out to Season of Mist for a comment on Ecstatic Trance and Label Owner Michael Berberian had this to say:

"First of all, most underrated album on SOM in my opinion.

We saw the potential in a band that were evolving from a younger scene & crowd, into something meaner, darker, more adult.

It didn’t really meet its public sadly, despise our best effort to explain 'this ain’t a kiddie band anymore,' while I think their last album is artistically their best effort, miles above what they did before.

It’s industrial in its form, in its heaviness and rhythmical repetition. It's relentless. I’m sad to see them gone, they were evolving not into something beautiful, but into something very, very ugly. And that’s what I want in music".

Berberian touches on something poignant. A Life Once Lost were lumped in peripherally with the oft-maligned New Wave Of American Metal movement—certainly their repeated partnerships with Randy Blythe of Lamb of God encouraged that association. That movement was probably the closest American heavy metal as a whole has come to the big four of thrash in 1986—a balanced synthesis between artistic sensibility and commercial appeal. It fizzled out on the critical end, probably because mature listeners didn't find it 'serious' enough, and for many bands that's a fair assessment.

A Life Once Lost didn't escape that judgment cleanly. For example, the band's most iconic song is probably "Vulture," which closed their sets during this year's Machine Man tour. that song's second verse begins as follows:

"In absence of your favor I would rather choose death/
I prefer it would be executed only by you".

I can see where some people might find such lyrics juvenile. Who is the 'you' involved—a parent? A spurning lover? God? Some of the likely suspects don't feel stereotypically metal, even though more popular metal songs than we care to admit are probably directed at them. Satan does not have too much of a bearing on my everyday life, and fortunately, neither does war. Interpersonal relationships, however do. Feelings do.

A Life Once Lost played with feeling. Moreover, they evolved from album to album, and produced a discography that, eight years after entering, I can still enjoy. I agree with Berberian that they shone brightest at the end. It's a shame that we will likely never hear a sixth album from A Life Once Lost.

A Life Once Lost - "Vulture"