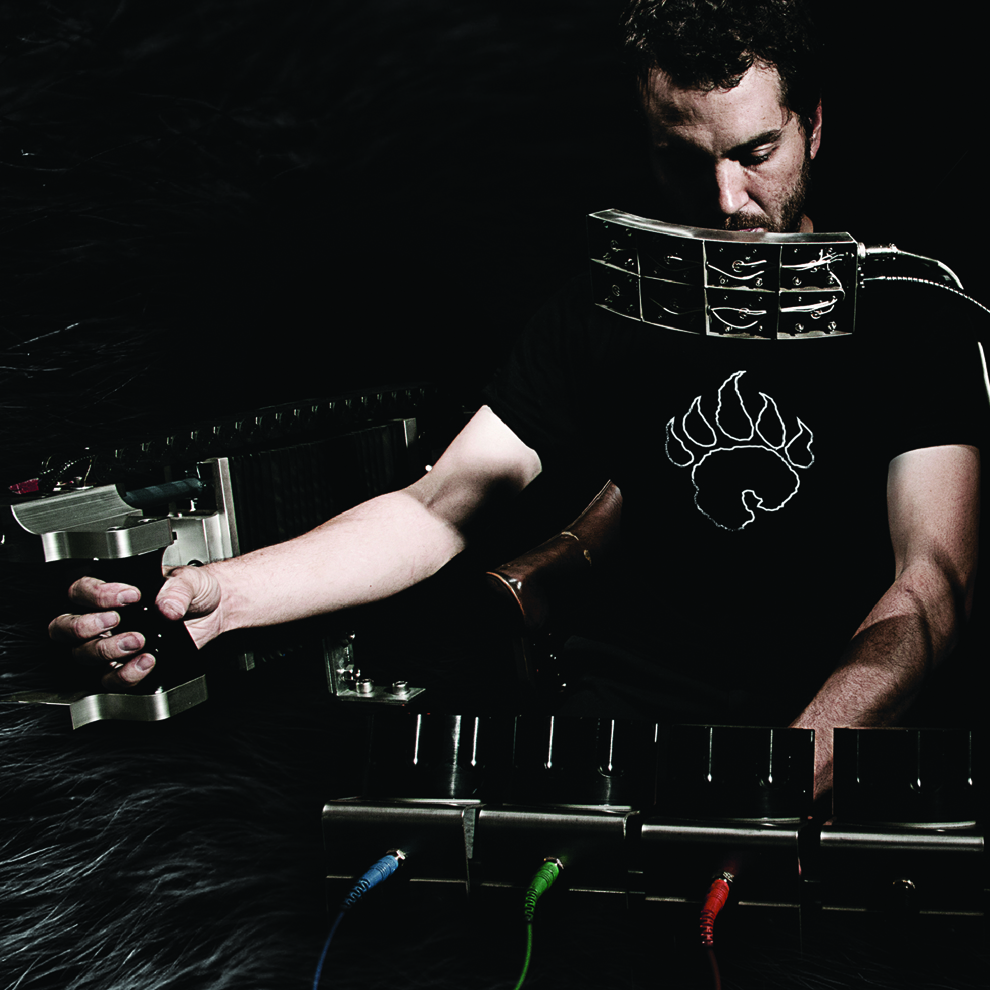 The days when Industrial and Metal crossed over frequently are all but over, even though more metal bands are willing to incorporate some (or many) electronic elements, thanks to laptops doubling as cheap sampler-keyboardists that require no food, water, rest, or paycheck. Even so most bands are unwilling to place an electronic element front-and-center in their compositions—interludes aside. The laptops keep innocuously on the sidelines and singer-guitarists still reign supreme.

Tristan Shone flies in that trend's face. As Author and Punisher he composes and performs music that is undeniably metal, though he performs only with home-made electronic instruments. The array of throttles, levers, knobs and sliding devices that make Author and Punsiher resemble the control room of some Anime-style death machine . . . and also an imprisoning work station. To some, that might sound gimmicky, but Shone earns his theatricality with a command of atmosphere and some of the best industrial-metal songwriting in recent memory.

The album title, Ursus Americanus, seems to clash with the music. For one, the American Black Bear is notoriously small and docile (for a bear at least), and for another A&P sounds inorganic. What went into that title?

Well, it's actually a very personal title. Other than having some embarrassing and memorable run-ins with real black bears while camping, I think you nailed it on the head with the docile description. Author & Punisher is not as much about violence as it is about devastation of the senses, emotionally and physically, and although the music externally appears techy and inorganic, possibly, I feel it is very analog and organic in the sense that I don't sequence anything, and my motions have a 1 to 1 impact on the music. I know that doesn't completely answer the question, but I am also interested in going with a certain element of gut, which can lead to a pleasant subconscious ambiguity. Things can be left for feel rather than rationale.

The first Author and Punisher album is quite different from Ursus Americanus! The Painted Army has lots of vocal hooks and a political lyrical slant; how did you get from that to Ursus Americanus, where the only vocal hook is “Lonely”?

Ha, yeah it's definitely a change. I think I always wanted to play the type of stuff I am doing now and striving for, but I didn't quite have the means to do it. That album was my first using a laptop for the band in a box kind of mentality and it is very much like a runaway car, where you just keep adding layers and parts and end up with something that you either need a full band to play live, or you have to sequence a bunch of stuff. I didn't like that setup as it didn't have enough live spontaneous spasm, even though I like the material. Over the next three albums, I essentially just went with my gut on what I thought was emotionally and devastatingly heavy . . . this kind of culminated in my vocals being sounds and maybe ideas rather than lyrics. I prefer to not think too much about the words as sentences with meaning, but rather as textures that pop out of the sound. Loneliness is the only single thing that I felt during that song, so I didn't want to overdue it with bullshit.

And where did the Dub Machines come in? Where do the ideas for them stem from?

I feel like most of the time I'm listening to electronic music. I design and make sound systems with a friend of mine, and one of my favorite things is sitting in the afternoon San Diego sun at my warehouse, blasting bass heavy electronic stuff. The Dub Machines were a step towards trying to get into some of that. Whereas the Drone Machines were all about rotational inertia and weight for drone and doom stuff, the Dub Machines are intended for more dynamic, sometimes faster, intricate music. In the end, though, I ended up playing kind of the same thing, but with a bit more going on I guess.

You've put a lot of information on the machines up on your website including the Headgear’s coding. The Big Knobs are for sale as well, though I assume these are reconstructions, not the original gear you use. Do you see a future where other musicians are performing with your machines?

Ideally, I would not create a company making this stuff, as I prefer to keep them as art/sculptures. Once you start thinking commercially, you consider saving money and using cheaper materials, different design techniques, etc. I try to make things exactly as they should be for the job and unless you work in a research lab (as I do) where you are making one-offs to prove something scientifically, then chances are the quality will decrease. At some point, if the situation was right and someone wanted me to make them something for their set, it's not out of the question. I sold zero Big Knobs but had a lot of interest . . . there were comments and emails about why someone would pay $250 for 1 knob when they could buy an m-audio with 40 knobs for the same price, which I can't really answer, it's art.

In the video with Wired magazine you made a point that the machines need to have a tactile appeal to you. What exactly are you looking for in terms of feeling? Do you want to burn calories while performing?

I drink far too much beer to reap the benefit of any bodily motion, haha. Tactile refers to the feel. It's not really about force so much as the feel creating a meaningful relationship with the the sound you are making. This is classic interface design, kind of like the difference between the BMW door closing and the Yarus. There are devices I come across in my daily work life that have this property, mostly because of their precision in design, which then come across as very satisfying to use. We just bought a vacuum cleaner for like $150 . . . what absolute piece of shit, I just want to destroy it to prove a point. I miss the old metal hoovers that had ball bearings in the wheel chassis instead of the steel-shaft-in-plastic-hole type. I've often thought of releasing a set of A&P household appliances that are all manual, but have serious gear ratios so you can blend your kale smoothly and feel the power.

The Machines seem to have a unified aesthetic, particularly the old ones—the Bellows, Throttle, and Rotary Encoder all share a sort of steampunk-meets-art deco theme. Was that intentional, and if so what is the current beneath the Author and Punisher 'look?'

The Drone Machines did have a somewhat vintage aesthetic, which I am not crazy about. I was in art school and experimenting with different ideas. I liked old control panels and dials indicators, so I tried to work some of that in, but I really made sure everything on there had it's function. I really hate steampunk mainly because it's less about function and more about theatrics. The newer machines were directly inspired by working in the electron microscopy lab, where I designed robotic and optical components for different applications. I didn't want any fluff with these machines; just the efficient amount of parts to achieve feel and also durability.

Your main gig at the microscopy lab is scientific and analytic, but your work as a musician is expressive and aesthetic. Where do science and art meet for you, and what is the significance of those ideas interacting?

I am very much an engineer, but I am often left empty without any expressive component to my job. I feel I do good work, and I really enjoy the fine details of designing and fabricating something intricate and functional, but to not be the creator of the 'idea' that funds and fuels all the hard work, kind of kills the desire. With my sculpture and music, I am able to go through the same analytical process, but I know that I will have a meaningful experience at the end of it . . . shows, festivals, emotional connections to my music: fun. At my job I pass is it on to another scientist and that's that.

Author and Punisher's history of live venues (judging by your website) feels almost academic--do you see any A&P performances in extreme music festivals or venues in your future?

Actually, it's been about 50/50, you only really see the videos of the academic festivals online because they were professionally taped at big venues. I played tons of bars and clubs all over the place. I toured the US a few times and Europe twice now for music festivals. For me, I am thankful that I can play art and music festivals because both have their advantages and disadvantages. As dark as I feel my music may be, I don't always like being in a shit stinking bat cave (laughs). I like playing family festivals too; kids with balloons and ice cream like doom metal too, their parents just don't let them listen to it.

You spoke earlier about listening to bass-heavy electronica. What do you think about the zeitgeist of electronica these days?

I think it's great. With guys like Flying Lotus and James Blake playing really creative, almost organic sounding electronic, the flood gates have been opened for mixing genres and I feel it's almost confusing . . . like people can't classify themselves so easily, which is a relief. Dubstep is really nice music, but it got so cornered and labelled that it lost it's freedom and became boring. I think that has settled, so I can go to a dubstep night now and hear new variations that aren't as formulaic.

Honestly, my industrial knowledge is pretty minimal. Most of my influence is electronic and metal. Only lately have my crazy industrial friends in NY/Philly/EU turned me onto stuff I should've heard long ago. I guess maybe, without trying to piss anyone off (!), I feel industrial should maybe be more about where industrial music can go, the tight leather pants thing seems a bit cheezy (laughs).

Have your ever considered offering your material up to be remixed, or even emcee'd over? (and if you're down with such a thing, who would you like to see remix or spit over A&P?)

Yeah, I sometimes leave some lengths of songs to be remixxed or DJ'd with, but so far nothing. But, yeah that would be fun. Hopefully with vinyl of both albums coming out this year, some of that will happen.

I like playing piano and guitar, but I am not particularly great at either. After creating these new relationships with sound, I really can't imagine wanting to move toward a band and a drummer and all that. I am however, working on a set of masks right now, that modulate your voice mechanically. I have about 5 performers and a piano player and it will be fully acoustic. This is a chance to explore industrial and visceral music on an acoustic scale (laughs).